The HTC One features a wider-angle lens, allowing you to fit more without walking back, but also meaning that each object is described by fewer pixels. We're dealing with a 13 MP and 4 MP units here so in order to compare them more easily we've done some resizing. In the first test scenario the HTC One samples were upsized to meet the LG G2 in its native 13 MP resolution, while in the second part the LG G2 goes down to 4 MP to tumble with the One.

We've also supplied all the full resolution samples below the crops so you can compare the two devices as you please.

Upscaling is the proper way to compare resolved detail in shots captured at different resolution. As it turns out the different pixel count is more than marketing talk in this case as the LG G2 comes out the clear winner here - objects are nicely detailed and shadows aren't as noise-heavy as those on the HTC One.

There's also noticeable purple fringing on the HTC One's images whereas the LG G2 shots are free of such defects. When we look at the downscaled images (when the LG G2 loses some detail but also some noise) things look better for the HTC One, but it's still unable to match the detail level of the LG G2. 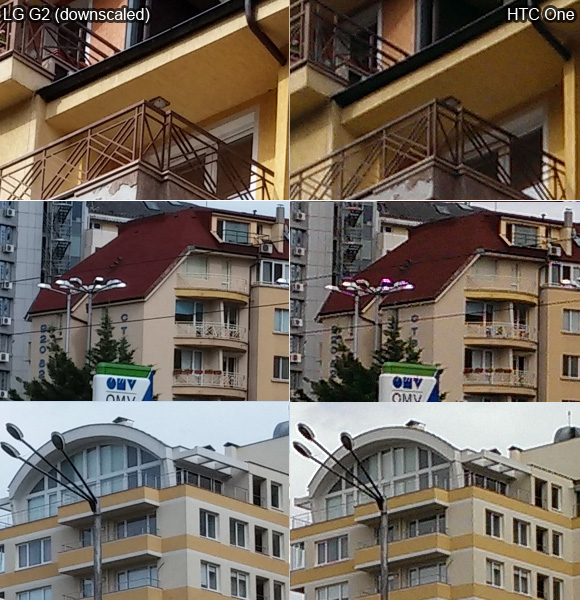 Moving on to low light photography. The LG G2 and HTC One both have the advantage of optical image stabilization, which reduces shaking and, in theory, allows for slower shutter speed and lower ISO settings. In theory, the HTC One's larger pixels should give it a slight advantage here as they should capture more light. The HTC One also has an F/2.0 aperture compared to the F/2.4 on the LG G2, which adds to its light capturing advantage.

We shot a couple of samples in a dim-lit room with both phones at Normal and Night modes (without the flash) and in Normal mode with flash enabled and compiled the best and worst samples so you can know what to expect in those scenarios.

The LG G2's Night mode is hardly of much use as in low light conditions the camera software detects the light is insufficient and mimics Night mode even when set to Normal. This means that selecting Night explicitly makes next to no sense.

The HTC One produces pretty noisy images in low light without the flash. The software is obviously hard at work with noise suppressing but the final result is not only noisier but also less detailed than the G2 output.

In Normal mode the LG G2 tends to select slower speeds than the HTC One, which means that its shots run a higher risk of ending up blurry. It appears, though, that the G2 image stabilization partially makes up for that as our samples are similarly shaky.

Flash photography also goes in the LG G2's favor - its single LED is slightly more powerful than that of the HTC One. However in close range scenes such as the one below this leads to over exposure and loss of detail. We've compiled the three low light samples of each smartphone below.

And here are the HTC One's full-res samples.

We also compiled the HDR samples of the LG G2.

And those of the HTC One.

When it comes to Panorama shots the LG G2 can go both ways - portrait and landscape. However oddly the LG G2 resolution is rather limited, producing panoramas of around 6 MP.

The HTC One can only record panoramas in landscape mode and lets you stitch more shots together. Its panoramas tips in at around 8 MP.

Winner: LG G2. The higher pixel count lets the G2 easily take the good light round and the two are quite evenly matched when the lights go off.