The latest generation flagships from the South Korean companies both feature 13MP shooters, but they differ in terms of camera hardware and features, so before we delve into image quality we'll have a look at all the bells and whistles the LG G2 and Samsung Galaxy S4 offer.

Perhaps the biggest difference is that the LG G2 camera offers optical image stabilization (OIS), which has very noticeable effects in low light photography and in video recording (without it, most videos look like shot by an amateur with shaky hands).

That's not the only advantage the LG G2 has - it can record 1080p video at 60 frames per second, while the Galaxy S4 manages only 30fps. For action packed scenes this makes quite a difference as it makes fast motion appear very smooth.

The interfaces of the two cameras differ - LG is still using the traditional UI with the controls on either side of the viewfinder and there's a still/video mode toggle. It's not a bad interface - it's been around for a long time and it's familiar and functional.

Samsung meanwhile has moved away from that style of camera UI and uses the clean UI we first saw on the Galaxy Camera. It's still very functional and most common options are a couple of taps away, no further than on the G2, but the viewfinder is less cluttered. The one downside is that the still and video camera viewfinders have been unified, meaning framing 16:9 videos can be tricky if you're shooting 4:3 stills (the still photo aspect ratio takes precedence and the viewfinder is 4:3).

The field of view (FoV) for the LG G2 is slightly wider than the Galaxy S4 - not enough to make a big difference, but you'll fit just a little more in a G2 photo (the downside is that wide FoV can negatively affect fine detail). 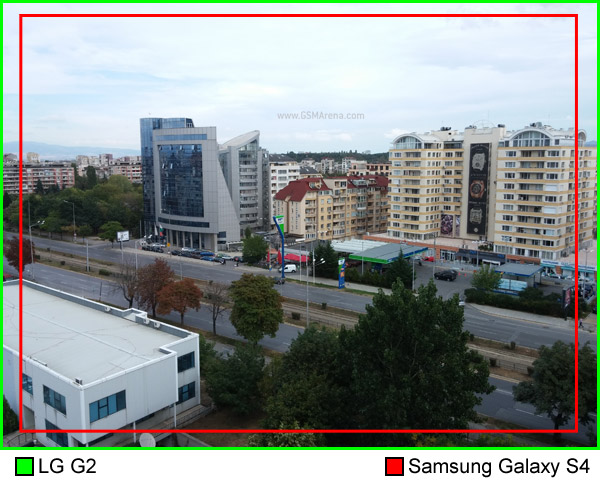 The video camera FoV is wider too (no surprise here). 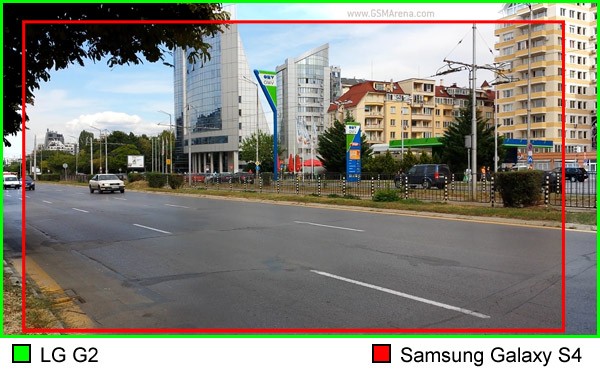 There's one more thing we should note - the LG G2 shot to shot time is very short, while the Samsung Galaxy S4 takes noticeably longer. You can set up the volume rockers on both phones to act as still or video shutter keys (or a zoom lever), but since the one on the LG G2 is on its back, right next to the camera it's not very useful. Both have voice-activated shutters.

Now let's look at the party tricks - a lot of those are quite useful, not just gimmicks and a lot of them are identical on both phones.

For example, dual-shot lets you snap a photo or capture a video with both cameras simultaneously, so you can be in a group shot too, even if you're the one holding the camera. Both phones let you move around the picture-in-picture window, resize it and swap which camera captures the big picture and which one the small picture.

The LG G2 has something called Time Catch shot - it captures a few photos before you even press the shutter key, decreasing the chance you've missed the perfect moment.

The Samsung Galaxy S4 has a few more tricks up its sleeve - Animated Photo (makes GIFs), Sound & shot (records background audio for the photo, but these are hard to share) and Drama Shot (makes multiple copies of a moving object). Remote viewfinder lets you use a second Android device as a wireless viewfinder, while Tag Buddy will help you tag people in a photo by learning and recognizing their faces.

That's for stills, video recording on the LG G2 also has been imbued with some tricks - Live Effects humorously distort people's faces in real time, while Tracking Zoom is another picture-in-picture effect, which zooms in on a part of the image (however, despite the name it doesn't track objects, you have to manually move the window). Audio Zoom boosts the microphone, which records the video sound, so it can highlight the sound of the subject you are zooming at (your kid in a choir, for instance, or a person you are shooting in a noisy street).

The LG G2 has a VR Panorama option, a Photo Sphere equivalent. The Galaxy S4 had a similar option but it has since been phased out by Samsung.

The Galaxy S4 wins back some points by doing a better regular panorama - it does a full 360-degree circle and the result is a whopping 60MP image often weighing in at about 20MB. The LG G2 only does a small arc and stays below 10MP and 2MB in size.

The LG G2 camera comes with all the bells and whistles you might expect from a flagship device. There is Optical Image Stabilization, 1080p @ 60fps video, faster shot to shot time and wider FoV sealed the deal. Those are enough to score nicely in this section, but we'll have a look at how good is this new video recording mode in our dedicated Video recording comparison.

The Samsung Galaxy S4 has more party tricks, but it has dropped the Photo Sphere option and LG has obviously made a point about matching all fancy camera features on the S4 and then it added a few on top of that.

We were expecting both phones to perform pretty similarly for still photography and we were right. They have slightly different image processing setups, which also affects look of the photos.

The first crop shows a small advantage for the Galaxy S4 in terms of sharpness. However, if you look at the lines you'll see that the S4 applied more sharpening to the image than the G2, which certainly contributes to the perception for sharpness.

The second crop is from the same photos, but taken from the ride side of the image. Here the Galaxy S4 photo is noticeably softer, especially when you look at the foliage.

The third row of crops shows a surprising difference in white balance - Samsung phones typically gravitate towards a cooler balance, but the Galaxy S4 photo came out noticeably warmer, while the LG G2 was a bit too cool. It was a cloudy day, but not quite as gloomy.

Also, notice the oversharpening halo between the trees in the distance and the sky in the Galaxy S4 photo and that the roof has more detail than the GL G2 photo. You can apply some sharpening to the G2 photo and bring out some more detail, but not quite as much (it helps that the Galaxy S4 does this before the JPEG compression).

The final pair of crops shows a difference in exposure - the Samsung Galaxy S4 photo shows more detail in the shadows and looks brighter overall than the LG G2 photo. Again, it was a cloudy day, but not quite that dark. You can also see the sharpening on the small lettering on the blue background. 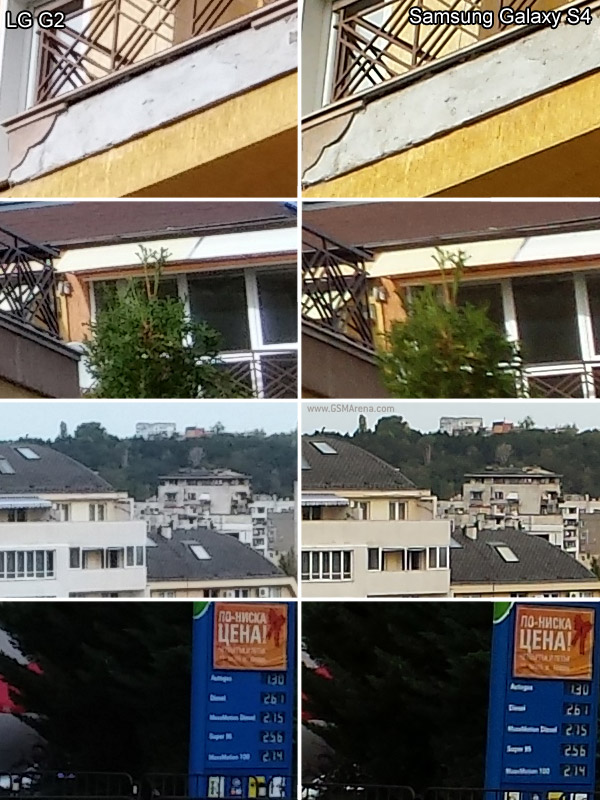 Here are the full resolution shots we used to make the crops above, plus some extra samples.

And here are the panoramas we shot with both phones. Again, the Galaxy S4 panorama weighs in at 20MP and has around 60MP resolution, so it may take a while to load.

Let's look at the HDR samples next. The LG G2 brings in detail in both the highlights and the shadows, while the Samsung Galaxy S4 focuses on the highlights and mostly leaves the shadows untouched. Both phones carry over things like white balance and sharpening from the regular photos, but on the up side they don't increase noise or make the image softer (which can happen if the alignment of the multiple exposures isn't perfect). 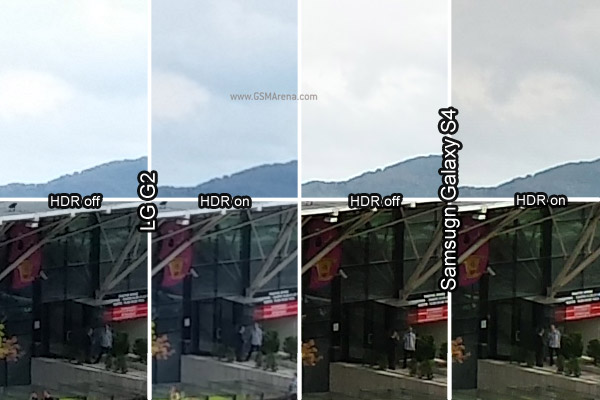 As usual, here are the full resolution shots that were used to make the crops.

The Samsung Galaxy S4 had the sharper image more often than not (but by a really tight, pixel-peeping margin) and we like its white balance and exposure choices better.

The LG G2 on the other hand has a slightly wider field of view and its images don't look as processed, both of which will surely be some handy advantages to many of you. We also like the HDR mode on the G2 better. Note that we're not taking into account the low light capabilities of both phones, an area where we hope the OIS system on the G2 would provide a clear edge.