LG's smartphone design has become synonymous with razor-thin bezels and the LG G3 doesn't disappoint. In fact, it greatly impresses by just how much screen it manages to fit inside a relatively compact body. We say relatively because the G3 is not a mini by any means, but 5.5" devices so far have been unanimously bigger than this.

This minimalistic approach leaves little to adorn the front. There is just a small panel of plastic with brushed metal finish below the screen and a small sliver of black for the earpiece and sensor array above the screen.

The screen itself is protected by Gorilla Glass 3, while the back and sides are made by a scratch-resistant polycarbonate. It has a film with a metallic finish and it hides fingerprints quote well.

At launch the LG G3 will be available in the de facto industry standards of White, Black and Gold colors, along with Red and Violet. 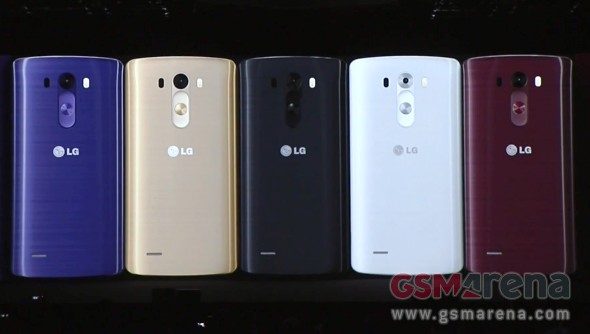 The LG G3 will be available in black, white, gold, red and violet

While we're focusing on the back, LG reused their idea of having all the hardware keys there (power and volume).

The material used for the back is another thing of interest. LG has produced a polycarbonate plastic that looks like having a metallic finish, but it feels likes plastic nonetheless.

The camera is right above the button assembly. On one side of it is the dual-LED flash and on the other the so-called laser focus sensor. It's actually an IR LED, but we'll get back to the technical details of the camera later on.

There's a second IR LED too, this one is on top and it is used for remote control duties.

There isn't any room for stereo speakers up front (we've seen how those can affect the height of the device with HTC's devices), so LG left the speaker on the back. It's a single speaker but a powerful one - normally it puts out 1W of sound, however with the boost feature this grows to 1.5W. The company compared this to the Samsung Galaxy Note 3 speaker, which is rated at 0.7W. They also claim that the speaker amplifier has been reworked since the LG G Pro 2 and it now allows for an even better sound experience.

LG made a conscious decision not to make the G3 water resistant. The design team felt IP ratings mislead consumers about just how much they can put the device through, which has the potential to lead to trouble. Plus, they didn't want any pesky caps covering the ports.

Another decision LG explained is the lack of USB 3.0 port - "big and unattractive" says the company, rarely used to its full potential, too, we might add.

The LG G3 is powered by a 3,000mAh battery, which works with a number of software power saving features to prolong battery life. Wireless charging will be available as well, although only as an optional feature. The battery is removable too, for those who like to carry a spare.

The battery should also live longer in terms of cycles, since LG replaced the traditional metal with carbon ones.

For this generation, LG went all out both in terms of size and resolution. At 5.5" the True-HD IPS+ display leaps ahead of direct competitors and threatens phablets like the Galaxy Note 3. LG is boasting that 76.4% of the front is covered by screen.

The increase in diagonal also made it necessary to bump up the resolution. QHD resolution (1,440 x 2,560) may sound like overkill, but LG looked at the densities at which magazines and art books are printed and wanted a display that can match them in terms of visual acuity.

From our short experience with the smartphone, when looking the the user interface, the higher resolution of the screen is not obvious at all. However, when you open a high-quality image in the gallery, the positive difference in the available detail compared to say, the LG G Pro 2, which we have handy, is easily noticeable.

Resolution increases always come hand in hand with worries of increased battery life, but the screen controller used in the LG G3 reportedly consumes the same amount of power as a 1080p controller. The UI refresh rate is also constantly adapting to minimize power usage.

The screen has another super power, too. Thanks to changes in the production process, the digitizer should continue to work even if you crack the screen badly.

The LG Circle case was announced a bit earlier than the G3 itself. At the G3 unveiling event we got our first chance of seeing what the circle UI looks like.

The LG G3 circle case and the circle UI