The LG G3 case leaks continue with a Spigen Slim Armor case. Among the many promo images for the new protective case are a couple that give the exact dimensions of the case. Using that as reference, we calculated the size of the LG G3.

Here's a table of how the upcoming flagship compares to its direct competition and last year's model.


If the numbers pan out (and after the impressive LG G2 design, we're optimistic), the LG G3 will be virtually the same size as the Samsung Galaxy S5, but with 0.4" larger screen diagonal. That would give it around 16% more screen surface area, not accounting for the on-screen buttons. 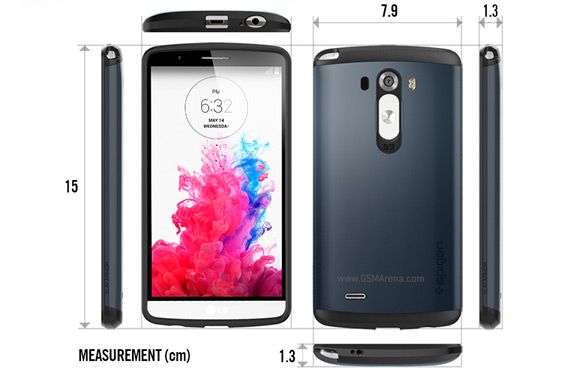 The LG G3 is shaping up to be an absolute beast. That 5.5" screen will have QHD resolution (1,440 x 2,560 pixels), the phone will be powered by a Snapdragon 801 chipset and will have a 13MP OIS camera with 2160p video capture. There's talk of water resistance too. The expected price is €610 for the 16GB model (with microSD slot this time around).

That's all according to rumors, of course, the official announcement should take place in a week on May 27.

Thanks to BCO92 for the tip!

Whaddya know, I was right about the colors....