A listing on LG U, a South Korean mobile carrier operated by LG, has appeared online confirming the G3's pricing and specs. The domestic version of the phone carries a model number F400L and it is going to cost $635 (KRW650,000). 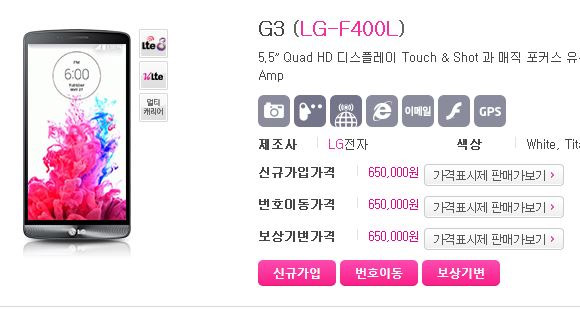 The Korean LG G3 will be available in white, titan and gold color options and will pack a Qualcomm Snapdragon 801 chipset with 3GB of RAM and quad-core CPU, a 5.5" IPS QHD display and a 13MP main camera with OIS. The battery is 3,000mAh in size and is removable, just as a recent leak confirmed.

These key specifications are in line with what we found out just a few days ago and LG U confirms the G3's measurements too - 146.3 x 74.6 x 8.95mm. Sadly, the weight of the phone isn't specified yet.

The closer we get to the official LG G3 event, the more information we get of the phone leaving the company less and less room for pulling any surprises. LG officially unveiled the phone's Quick Circle case and we saw it in the flesh in addition to the phone's official wireless charging accessory.

Not only that, but LG already released three promo videos to build a hype before the G3's official announcement. It is scheduled for May 27 and we'll be covering every single bit of it, so stay tuned for everything LG G3 related as next week approaches.

How moch the philipine maney?

The have very good speed in net. Beutiful and sensitive touch. But mobile heat off . sir please tell me how can we keep it cool. And how can we get good picture