It's not like the LG G3 has been a particularly well kept secret. The smartphone, which is set to make its debut next week has appeared on camera multiple times, revealing much of its specs sheet in the process. Yet today, we've got a leak so massive that it almost makes us question why LG will bother with the announcement at all.

It appears someone was able to sneak in a camera at an early preview event and capture several slides of a presentation, detailing the smartphone.

The first of those holds the most information - it confirms the LG G3 will come with a 5.5" QHD IPS screen and a Snapdragon 801 chipset with 3GB of RAM. The smartphone will be powered by Android 4.4 KitKat and it will pack an optically stabilized 13MP main camera and a 2.1MP front-facing snapper.

LTE and LTE-Advanced are naturally supported, while the connectivity department will also include USB 2.0, Bluetooth 4.0 and NFC. GPS and GLONASS support haven't been mentioned, but they go without saying.

The internal storage is going to be 32GB, but sadly there's no mention of a microSD card slot for expanding that. Keep in mind that the presentation is for the F400S/K/L version, which is for Korea so storage might be different on the international units. 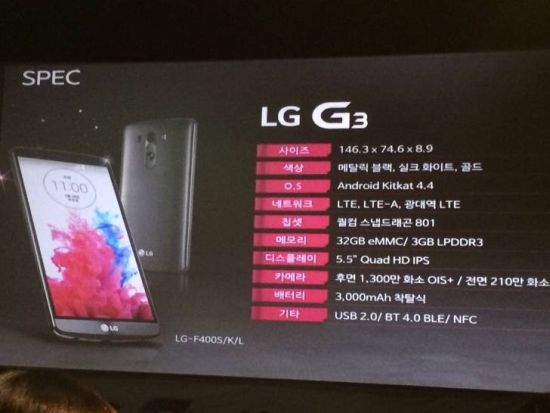 We also got to learn the capacity of the LG G3 battery, 3,000 mAh, and the exact measurements of the smartphone - 146.3 x74.6x8.9mm. That would give the G3 roughly the same footprint as the Sony Xperia Z2, albeit with a slightly thicker profile (the Sony flagship measures just 8.2mm). Of course, the LG G3 has a 0.3" larger screen to show for that.

Moving on to the next slide, we see the LG G3 screen compared to a certain competitor with a 1080p Super AMOLED screen with PenTile matrix. Obviously, the rate of the Samsung Galaxy S5 sales make it the Android phone to beat and LG will be doing all it can to prove that its flagship is better. 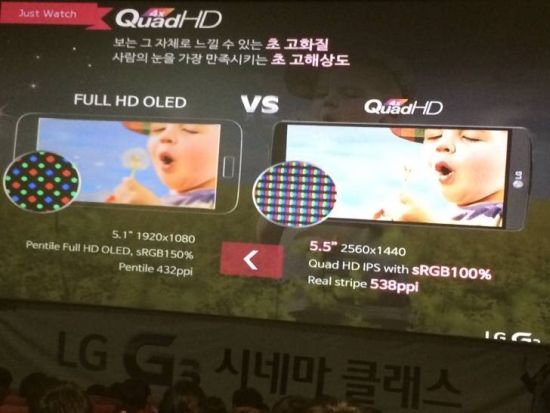 Next we have the slide that confirms our exclusive report of a 1W speaker. Audio is becoming an increasingly important part of the smartphone race and LG is keen to show it has a lot to offer on that end too. 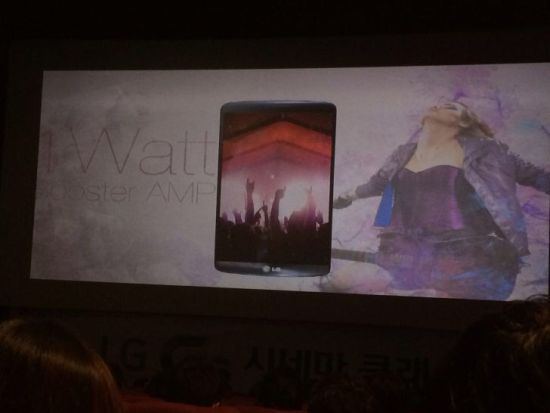 The final two slides are dedicated to the camera. One shows the new and innovative way of making the LG G3 capture a photo - by clenching your palm into a fist. 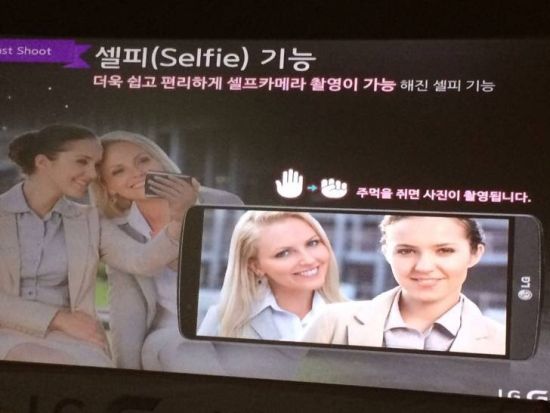 The other one is more interesting as it's about the mysterious device next to the camera. Our tipster pointed out that it's some sort of laser that should help with low-light photography and the slide clearly shows it's related to the camera.

However as far as we can tell given the quality of the images, the sample image LG posted is taken in broad daylight, so it's more of an universal tool. Thanks to our helpful member deltaeta we now know the text says "faster auto focus and dual flash, auto focus that focuses fast and without shaking" - so obviously it's some sort of focus-assisting beam. 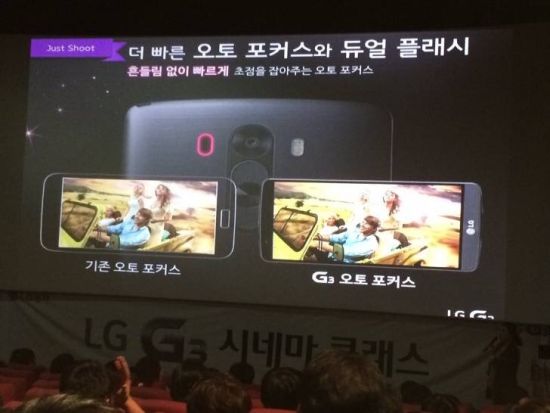 Mystery solved then, the LG G3 is almost completely detailed - full six days before the announcement. Naturally, we'll still be there when LG pulls the wraps off to bring you our first-hand impressions, but in the meantime feel free to share with the rest of us how you think it will compare to its direct rivals.

So far it puts it behind though.

Ofc it goes hand in hand. But by looking only on the MP saying the cam is shit is only stupidity.

Or don't get so fanboy defensive because they expected more. Especially when others like you have filled these pages with so much hype.