The HTC One M8's wider FoV is an advantage in the video department too. We found that going from 1080p mode to 2160p mode on the LG G3 reduces the FoV even further. This is something to keep in mind, if you can't fit everything into the frame, try going to 2160p. 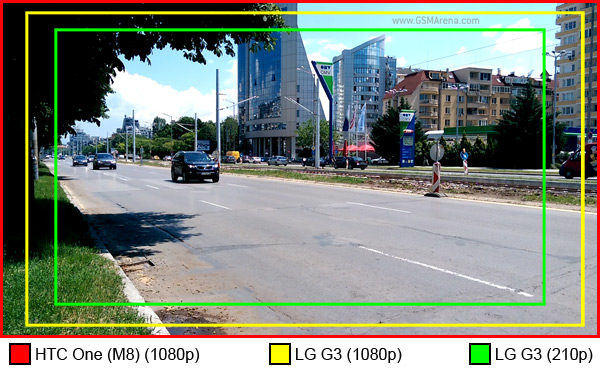 HTC took the One (M8) out of the running when it comes to 2160p video since a 2160p frame is 8MP, while the entire UltraPixel sensor is just 4MP. Yes, the LG G3 records video at a higher resolution than the One (M8) can shoot stills).

We would've forgiven it if the 1080p video was great - after all few people have the UHD TV required to enjoy a 2160p video. The reality, however, is disappointing. You can see that the HTC One (M8) video isn't a match for even the 1080p mode of the LG G3 - the "VIVA" text is legible in the LG video and a smudge in the HTC video, which also shows a blue tint and purple fringing yet again.

The 2160p footage blows both 1080p videos out of the water. It has a noticeable yellowish tint though, more noticeable than the LG G3 produces in 1080p mode. 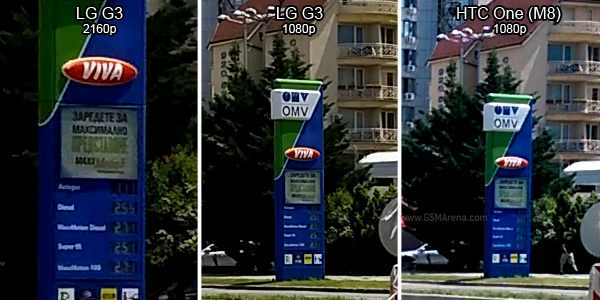 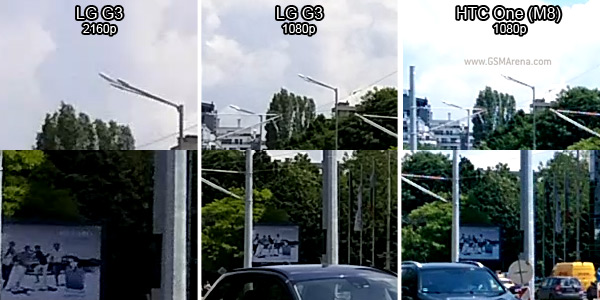 Both phones record 1080p video at 20Mbps using the AVC codec (High@L4.0 profile). The framerate is a smooth 30fps, but the HTC shows a slight advantage over the LG in terms of audio bitrate - 192Kbps over 156Kbps.

The 2160p videos from the LG G3 up the bitrate to 30Mbps and the profile to High@L5.1, but keep the audio bitrate the same. Even so, to our ears the LG G3 captured a fuller sound than the HTC One (M8).

The LG is a bit trigger-happy with the continuous autofocus though, which leads to noticeable jelly effect as the camera refocuses.

The LG G3 features optical image stabilization, the so-called OIS+ tech borrowed from the LG G Pro 2. The original HTC One had OIS too, but the successor dropped it, eliminating one of the key advantages the HTC held over some of its competition.

We've shot a video showcasing the optical image stabilization of the G3. The video was shot with both phones held together, with their cameras as close as we could get them to make sure the shake each phone experiences is identical.

Once again, you can head to our Video Quality Comparison tool for interactive crops in good and low lighting conditions, plus the ISO chart.

2160p is mostly for prestige these days, but not getting 1080p right means the HTC One (M8) is instantly shown the door. Dropping OIS wasn't one of the smarter moves the company made either.

We shot video in the same low-light conditions as the still photos, again with and without flash.

The LG G3 and HTC One (M8) manage comparable detail at 1080p, though the One (M8) footage is darker, with oversaturated colors and the white balance is off.

The LG G3 videos are marginally sharper, but if you switch to 2160p mode you certainly get a lot more detail. 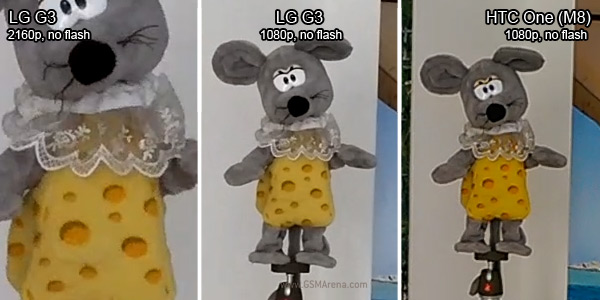 Turning the flash on didn't do much for the LG G3, but it threw the white balance off on the HTC One (M8) even further. 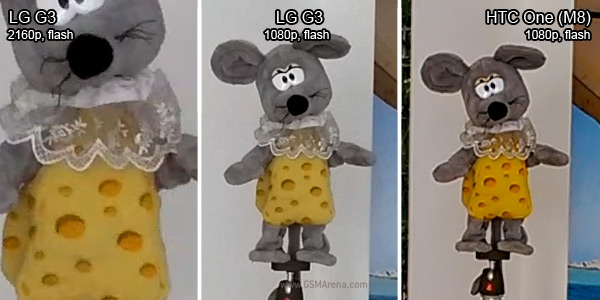 Winner: LG G3. HTC got a lot of things wrong with the One (M8) camera and the lack of 2160p video capture is just the tip of the iceberg. The UltraPixel camera is slightly behind on detail and needs tuning to provide accurate colors, especially with the flash enabled.