The LG G3 took the trophy and headed home, but the HTC One (M8) got in its way. On paper the LG G3 is the superior phone - same size, but bigger screen - the first of its kind, better camera, bigger battery. The HTC One (M8) initially only had its aluminum unibody and stereo speakers to give it an edge. 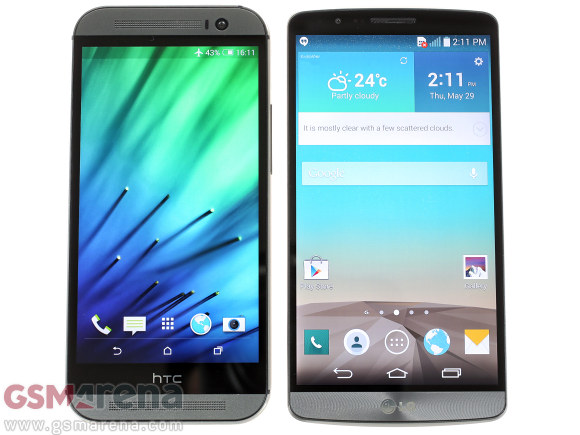 There's no denying the LG G3 screen is unique - to fit a 5.5" screen in practically the same space HTC only managed a 5" screen earns the LG team well deserved accolades. They were the first to get a phone with a QHD screen out of the gate too, but the low contrast and poor sunlight legibility are big problems.

The performance of the new flagship was a bit of a letdown too - it's one of the fastest devices around, but certainly not the fastest. Add the overheating issues and the G3 isn't quite the Snapdragon 801 beast it should have been.

Neither of these are necessarily deal-breakers per se, but we also got poor battery life out of the LG G3. The beefy 3,000mAh battery should have helped the G3 to the top, yet it lagged noticeably behind its opponent.

With not one but three areas of major concern we can't help feel the LG G3 shortchanged us on its promises.

On the upside, the LG G3's camera proved emphatically better than the UltraPixel unit of the HTC. It bested it in daylight and low-light photos, videos too. The extra camera options are not enough to save the One (M8).

HTC isn't out of the running though. It offered strong, consistent performance in benchmarks and also a great app package - the multimedia apps could use some work, but it's nothing that can't be fixed with a trip to the Play Store.

Where the HTC One (M8) falls hard is the camera, it barely has a leg to stand on. It will struggle to compete with a midrange Android and it's not actually significantly better than the camera on last year's HTC One. The LG G3 camera definitely feels like an upgrade over the G2, while HTC can't draw users in with the promise of better photography than the older, cheaper One model.

HTC marketing could mention the great battery life - the 2,600mAh battery of the One (M8) is nothing to write home about but frugal use of power helped the phone score a decisive victory. There's also the aluminum unibody. We quite like the plastic finish of the LG G3, but not everyone will agree. It's true that plastic feels different than metal, even if you can get it to look the same.

The front-facing speakers will see you playing music out loud on your One (M8) more often than you did with your last non-HTC phone, but unless it becomes a daily habit it's not a huge advantage.

We wish HTC had made more of an effort to keep the bezels in check as the One (M8) is a large phone. Also, you're essentially limited to Instagram photography, but if you want dependable performance, great build and solid battery life, the HTC One (M8) is on the shortlist of phones to consider.

The LG G3 meanwhile delivered some disappointments alongside its stunning achievements, but it is essentially the only current Android flagship phone with Optical Image Stabilization. The camera in general is very good, the screen and faux metal body are great if not excellent. If LG would only do something about that battery life.