The two phones are slightly rounded rectangles apparently made of metal. However, there's a striking difference between them when you put them side by side. There's a generous amount of space around the HTC One's 5" screen, while the 5.5" display of the LG G3 looks like it's ready to bust out of the frame. 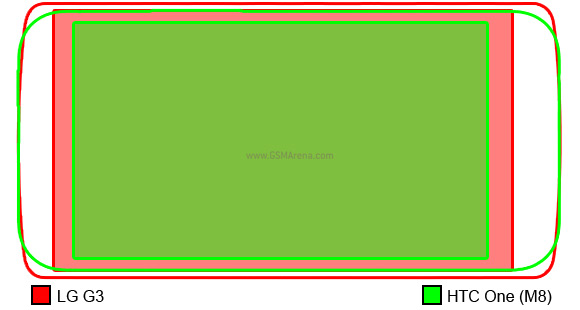 Both screens are secured by Corning Gorilla Glass but the One M8's display has a good deal of padding all around. Most of that comes from the two stereo speakers with dedicated amplifiers. There's a special edition of the One (M8) with Clear-Fi audio tech from Harman/Kardon but that's only available for Sprint in the US at the moment.

Anyway, the LG G3 only has noticeable bezel above and below the screen and even they are not particularly big.

HTC kept the aluminum unibody from last year's One but added a new finish option - brushed metal for the Gunmetal Grey color. The other two colors - Glacial Silver and Amber Gold - have a matte finish.

The LG G3 looks like brushed metal finish and comes in five colors. It has a special coating and, although not self-healing like the LG G Flex, LG says it's still resistant to scratches. The plastic is warm to the touch (giving away that it's not metal) but it looks the part and feels great in the hand.

A key difference here is that the back is removable so you can access the 3,000mAh battery and two card slots below (microSIM and microSD).

The HTC One (M8) has a sealed 2,600mAh battery and the card slots are on the sides, you'll need an ejector tool to access those. Note that it uses nanoSIM cards.

The backs of both devices are unique in their own ways. The HTC One (M8) has two cameras, the second one used solely for image effects. The LG G3 positions its Power key/Volume rocker assembly right below the camera and adds a special light emitter here used by the Laser autofocus system. Both phones use dual-tone, dual-LED flashes.

The LG G3 loudspeaker is on the back - there's only one, but it's quite powerful. Normally it produces 1W worth of sound, but with boost it can reach 1.5W.

Both phones have memorable backs

The tops and bottom of both phones are quite similar. There are IR blasters on top for remote control functions, while the bottom houses microUSB 2.0 ports and 3.5mm audio jacks. Unfortunately, the HTC One (M8) puts its Power button on top where it's hard to reach on the 146.4mm tall device.

The power key on the back of the LG G3 is much easier to reach though it takes some getting used to (we kept tapping the side of the phone).

Both devices support double-tap to wake so you don't need the hardware key to unlock the device. Both have their own tricks too - the HTC One (M8) can also be unlocked by a swipe up, while the LG G3 features Knock Code that lets you create a pattern of taps to make the tap to unlock option as secure as the pattern lock.

Winner: LG G3. We know some of you adore aluminum unibodies (we do too!) but the HTC One (M8) is just too big for its screen size. A bigger, accessible battery and better positioning of the Power key may sound like small potatoes but can have a big impact day to day.

The HTC One (M8) is certainly a looker, but HTC had a chance to improve on some things since last year's One and chose not to.