No matter how long and hard you look at the Android ecosystem, the Korean design excellence in both hardware and software cannot be denied. Over the last several years, Samsung has proven countless times why it deserves to be the number one smartphone manufacturer, taking a robust technological offering from Google and making it even more capable. LG, however, has grown tired of sitting on the sidelines. 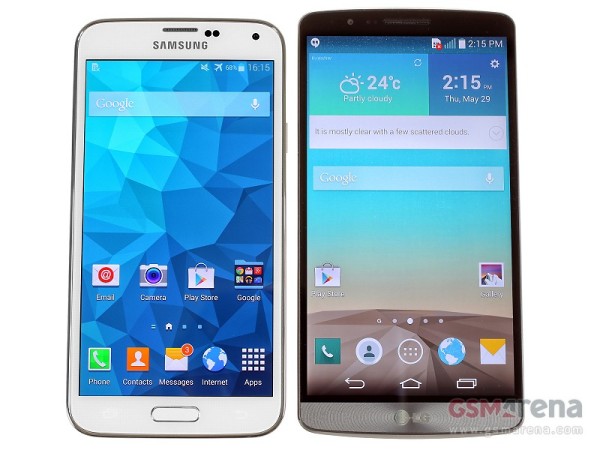 The LG G2 wouldn't have been what it was if not for the high bar set by the Samsung Galaxy S4. With the G3, LG came not as a follower, but a pioneer decisively stepping out of their compatriot's shadow. By being the first manufacturer to offer a QHD screen on a smartphone, LG has thrown down the gauntlet and beaten Samsung in its own game.

But at what cost? Despite doing very well by including the impressive screen with only a minimal markup in terms of overall size, the impressive-looking flagship is left behind its main rivals when it comes to horsepower. Taking into account that LG's engineers had several months to fine tune the performance due to the G3's late release, it was expected that the device would be able to hold its own on that front. Well, it does not.

We were hoping that the eventual European version would be more finalized in that regard, bringing the G3 up to par with the competition, but that also turned out to be wishful thinking.

But we just can't ignore that screen. QHD content is the same impressive jump as when 1080p was first introduced, and as more of it becomes available it should make the G3 even more viable - at least until other QHD devices get released.

A technological tour-de-force and sweeping financial success, the Galaxy S line is loved and loathed, watched and imitated. LG was one manufacturer which grew tired of the latter, and took a gamble by being the first to introduce a QHD screen.

The Galaxy S5 enjoyed the largest ever global rollout of a Galaxy device, and was able to sell 11 million units in its first month alone. Needless to say that's a steep mountain to climb for the likes of the G3, and it may not be able to rest on the laurels of its superior screen alone.

The LG G3 has all the features you would expect of a 2014 flagship, but the Samsung Galaxy S5 expertly backs apps with hardware features - the fingerprint and heart rate scanners enable functionality outside the reach of even the Apple iPhone 5s (where the fingerprint reader is exclusive to native services). The software package is one that LG struggles to meet but ends up merely imitating at best, resulting in very few characteristics that are uniquely LG, and many that are "borrowed" from Samsung.

Hardware-wise the Galaxy S5 is hardly the best looking flagship around, particularly when it comes to design. Although the Galaxy S5 saw a refresh of the hyperglaze back panel, almost every competing flagship offers an arguably better finish, including the LG G3.

The gamble that LG took with the G3 this could ultimately end up paying off, but past trends indicate that the Samsung has responded well to challenges from its rivals. But until that time comes, the unmatched screen, the excellent camera, and compelling design make the G3 a tough one to beat, despite its shortcomings. The Korean derby will only be getting more interesting to watch. That's for sure. Not everyone will end up choosing a side - but many will be tempted.