A benchmark revealed that the LG G4 won't use the flagship Snapdragon chipset, opting instead for the Snapdragon 808, which has a hexa-core processor – dropping two of the four power-hungry Cortex-A57 cores of the 810 chipset.

More evidence of that comes from a photo of a working device – reportedly the LG G4, though it's hard to confirm the identity of the device at that quality. The phone is shown running CPU-Z, which reports Snapdragon 808 with six CPU cores at and Adreno 418 GPU. 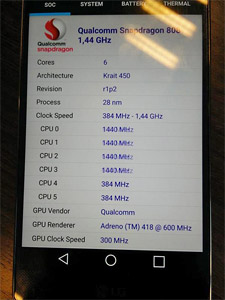 An alleged photo of CPU-Z detailing the LG G4's internals

The app claims 28nm build process, though the 808 is supposed to be built on the more power efficient 20nm. The accuracy of such hardware details is dubious when detected in software though. Never mind the "Krait 450" label either.

Huawei recently went all Cortex-A53 for its latest flagship, believing that less thermal throttling will make up for the difference in performance between the A53 and A57. Those A53s run at a higher clockspeed than the ones in the Snapdragon 808 though (2GHz-2.2GHz vs. 1.44GHz in the G4).

The early GFX Bench results show that Adreno 418 is an improvement over the Adreno 330 that powers the LG G3, but it puts it noticeably behind the Adreno 430 in the LG G Flex2. We'll get LG's thoughts on the matter on April 28.

You're right, I had to look pretty closely though!