LG G4 might launch on Verizon Wireless on June 4

Verizon might begin offering LG G4 early next month, on June 4. The date appeared on an official image of the smartphone, spotted on its dedicated sign up page by the Big Red. 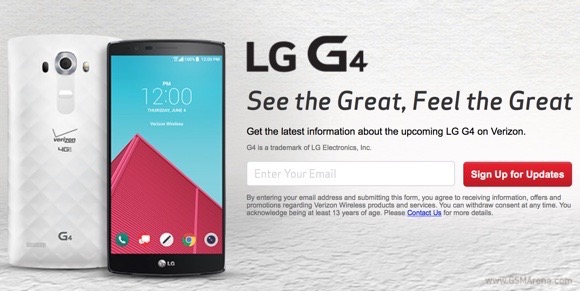 Overly anxious Verizon customers can leave their email address and receive updates on the exact availability of the smartphone. As expected the sign up page also highlights some of the key features that LG G4 carries.

Yesterday, LG announced the beginning of the global rollout of the G4 - the smartphone has been available only in Korea since its unveiling. T-Mobile is expected to launch the device on June 2.

You are. This is typical of simulated screens overstepping their actual boundaries on promo stuff. Rest assured, the Verizon G4 has the same bezels as all the other G4's.

Am I seeing thinner bezels here?