LG G4 ships in a rather understated retail box, which hints at the device's slightly curved design. Inside it, we found a charger and a USB cable.

It is worth noting that the unit we tested out for this preview is meant for the South Korean market. We are almost certain that the retail box in certain markets will feature a stereo headset and/or protective case.

In term of design, LG G4 continues to evolve the looks of its predecessors - LG G2 and LG G3. This time around however, the newcomer has also borrowed cues from the LG G Flex and G Flex 2 - it is slightly curved in a bid to deliver distinctive looks and improved ergonomics.

LG G4 in the flesh

When it comes to looks, the slightly curved body of LG G4 tells only half the story. It is the device's various back covers and their materials and textures, which truly set it apart from its predecessors and the competition.

The genuine leather which adorns the optional back covers for the LG G4 is commonly used in the luxury industry, and looks great in person. Available in several different colors and finishes, the hide is stitched with high-end Guttermann's threads and takes a whopping twelve weeks to produce. 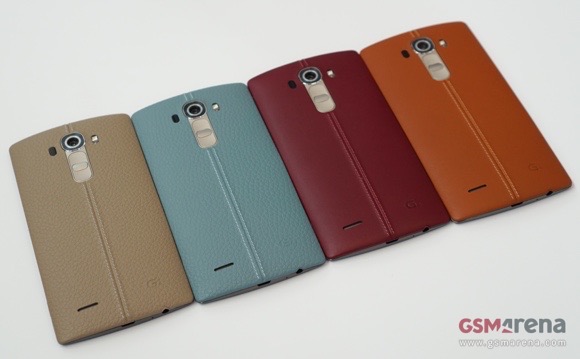 The plastic covers of the handset has gotten special treatment too. They are have "hammered pattern" with three available finishes - ceramic white, titanium gray, and gold. The white option looks particularly stunning in person, as it has been treated with actual ceramic paint.

Build quality of the smartphone is top notch. LG G4 feels solidly put together and ready to match the needs of an Android power user.

Allegedly, the gently curved body of the LG G4 will allow it to handle casual drops better than competing devices.

LG G4 sized up against Apple iPhone 6 Plus

Thanks to its relatively compact and also curved body, it is easy to handle the LG G4. The smartphone feels pleasant in hand, especially in leather guise.

Removing the battery cover reveals the user-replaceable 3,000mAh battery and a microSD card slot. Both features should be a boon for power users.

One of the biggest highlights in LG G4, its 5.5" QHD Quantum IPS display could well be the best unit available on a smartphone at the moment. The screen boasts pro-grade color accuracy and improved contrast over the QHD unit found in LG G3.

LG is keen to point out the screen is superior to the LCD unit found on the iPhone 6 Plus, but we will reserve our final verdict for the full review, after we test the device in our lab.