Both phones adhere to the current gold standard of 2160p at 30fps, but they have lower resolution modes as well. The LG G4 is a bit light on options here, offering only 1080p and 720p, plus a high framerate option. It lacks a 60fps mode though.

The Samsung Galaxy S6 offers 60fps mode at 1080p in addition to QHD and high framerate options. Note that it uses a combination of optical and digital stabilization, but the digital portion gets disabled when you go over 1080p @ 30fps.

The Galaxy S6 uses a higher bitrate for its 2160p videos, 48Mbps, while the LG G4 shoots at 30Mbps. This means a minute of S6 video eats up 360MB, while G4 videos take 225MB per minute. The flipside of this is that the higher framerate has the potential to keep more fine detail. For 1080p videos both settle on 17Mbps.

Sound is important to note here. The Samsung Galaxy S6 records 256Kbps audio, while the LG G4 is capped at 156Kbps. Even so, the LG G4 seems to have the better mics and the audio sounds better. It's also less susceptible to wind noise. 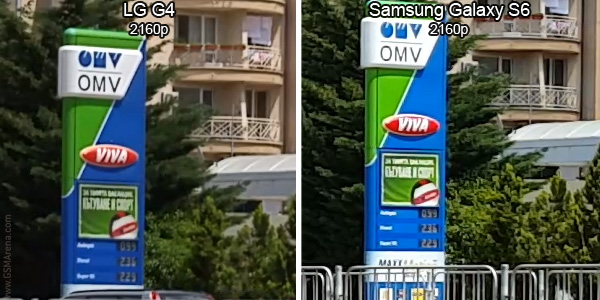 While the still camera field of view was equal for both phones, in video mode the Galaxy S6 is slightly wider, capturing more of the scene. The LG G4 dynamic range allows it to capture more detail in the shadows and highlights. It white balance sensor helps out again, the S6 videos have a cool tint.

Foliage and other fine detail in LG G4 videos still get smudged a bit and Galaxy S6 videos generally come out sharper.

The clouds rolled in by the time we got to the 1080p samples. So videos from both have washed out skies, but the underexposure problem in the Galaxy S6 videos becomes more pronounced. 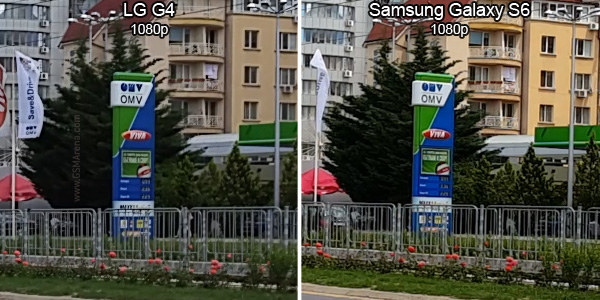 Unlike 2160p videos, the LG G4 leans on the sharpening (more than the S6), which creates some visible halos.

You can download untouched samples from both in case you don't trust YouTube's compression.

The Samsung Galaxy S6 videos are sharper with more detail, in part thanks to the higher bitrate. It takes up precious, un-expandable storage though. We were surprised to hear the higher bitrate audio sound worse.

Both the LG G4 and Samsung Galaxy S6 feature optical image stabilization for photos and videos. Digital stabilization is rarely any good and even when it is, it eats up too much of the field of view so OIS is a vital feature for both.

The effects of OIS are most visible in video, so we attached the two phones together and shot 2160p videos simultaneously on both. Here's what that looks like side by side.

The Galaxy S6 warns that it can't do additional video stabilization at 2160p - for 1080p videos it uses a combination of optical and digital stabilization. Even without that boost, the S6 video appears smoother while the LG G4 has some slight jerkiness in places.

Winner: Samsung Galaxy S6. Both phones do a very good job at absorbing the worst of handshake jerks, but the Galaxy S6 does it slightly better.