The Hatfields and McCoys are legendary rival neighbors from the New Continent, but South Korea has two tech giants instead - Samsung and LG. Their flagship phones, the Samsung Galaxy S6 and LG G4, will compete for every inch of ground gained on the market.

These two are quite different in nature and will appeal to different crowds. The thin metal and glass design of the S6 goes after the iPhone, while also catering to Galaxy faithfuls who weren't happy with the faux leather. The LG G4 steers away from the "smartphone slab" design with a uniquely curved body and provides a soft answer to Apple's and HTC's metal. 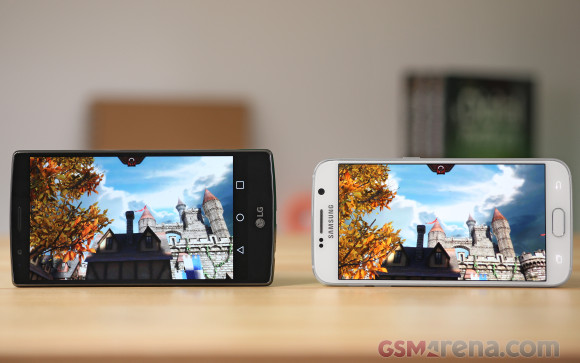 Those two fought tooth and nail in each chapter and in the process it became clear they are quite different in philosophy.

The LG G4 goes after the power user. It brings a huge screen in a compact body, giving you two options for multitasking and a modern OS with no bloat. The camera saw the biggest upgrade and it's friendly to new users, letting advanced hardware do most of the work, while remaining quite flexible in the hands of somebody who know what they are doing.

LG knows better than to coach you about storage and allows you to expand it with a microSD card. The removable back cover lets you change the battery as necessary and makes adding a wireless charging cover or a flip case easy.

Speaking of cases, the optional leather cover elevates the basic plastic design to a rare premium experience. True, the Moto X did it first, but genuine leather is very rare - much more so than the metal/glass combo of the Galaxy S6.

As for the Samsung Galaxy S6, it moves away from power users (the target of previous S flagships) and goes after the fashionable/business crowd. The S6 comes with a sleek design to rival the iPhone, offering no geeky distractions.

It does multitasking too and the camera is an upgrade from the Note 4, with a wider aperture and better software. The fingerprint sensor is much better too, ready to handle login and authorization tasks, while the hardware inside the phone is lying in wait for Samsung Pay to launch around the world.

The wireless charging is also an answer to the sealed battery issue - many venues have added chargers, so you can top up your phone during a business (or just office) lunch.

The Galaxy S6 edge is an interesting alternative. Pricy, but while G4's curved design is so subtle it's near invisible, the dual-curved screen of the S6 edge is instantly noticeable and unmatched by another device (the G Flex2 is curvier than the G4, but the Note Edge has only one curved side, not two).

Samsung thought it knew the audience it was playing to, but the Galaxy S5 slump proved otherwise. The company regrouped and rebooted its flagship line and the Galaxy S6 is one serious phone - no plastic and no gimmicky features.

LG had just hit the right note with the G3 and with the LG G4 the company is doubling down on that base design. Including some of that G Flex DNA gives it an advanced feel, while the leather backs give you a premium option few phones can match.

So, suit and tie or leather pants?