The LG G4 camera comes adorned with the most features yet. It has a brand new sensor with 16MP resolution and 16:9 aspect ratio, it sits behind a new lens with a wider f/1.8 aperture that also features 3-axis stabilization (up from 2-axis on the G3) and is backed by a Color Spectrum Sensor for improved color accuracy, in addition to the laser autofocus.

The Samsung Galaxy S6 has an updated camera too, building on the Galaxy Note 4 camera. It's a 16MP 16:9 sensor too, behind a similar f/1.9 aperture and optical stabilization. The S6 camera supports tracking autofocus, which makes it easier to keep moving objects in focus. 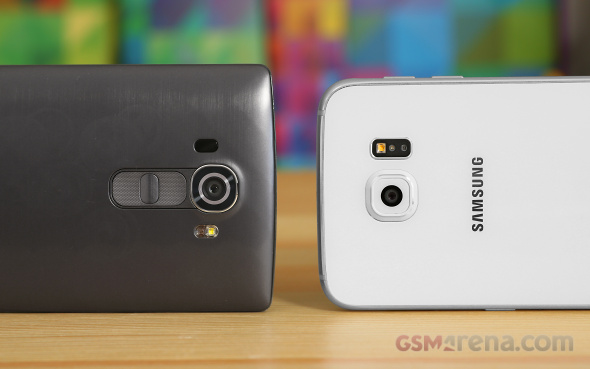 Even the front-facing cameras on these two are impressive. The Samsung has a 5MP selfie shooter with an f/1.9 aperture and digital image stabilization. The LG packs an 8MP shooter with an f/2.0 aperture. Both sensors are old-school 4:3, unlike their backside counterparts.

The LG G4 has one major advantage in software - it has manual control mode that can shoot RAW DNG images for later manual editing. There's a histogram too to guide you while adjusting the settings.

The Galaxy S6 has a manual mode as well, both phones let you adjust focus, ISO, white balance, the S6 also lets you tune contrast and colors. It lacks the helpful histogram and the ability to shoot RAW, though that one is expected with the Android 5.1 update.

First off, the field of view for both cameras is essentially identical. The LG G4 nails the white balance, while the Galaxy S6 daylight photos have a very slight blue tint. This doesn't mean the G4 has perfect color rendering though, reds come out closer to orange. The S6 reds look better though sometimes they lean towards purple. The Galaxy also oversaturates colors a bit.

For fine detail there's a shifting balance between camera sharpness, noise reduction and digital sharpening. There are areas where the LG G4 manages to resolve more detail than its opponent, however the noise reduction sometimes smears the captured detail. The LG G4, for instance, struggles with foliage, turning it into cotton candy.

The crop below shows the primary colors, you can also look at the full images for more examples. 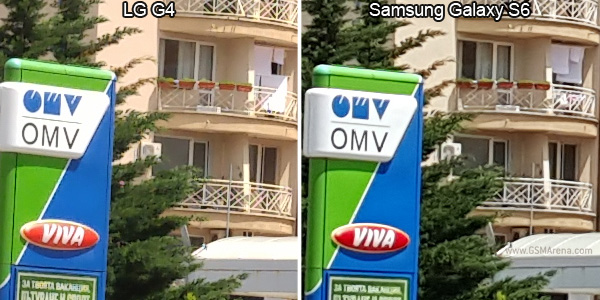 Also, corner sharpness is just not as good as on the S6. Look at this crop taken from the left fourth of the camera samples. The S6 might be have stepped up the sharpening, but no sharpening can fix the lens softness of the LG G4. 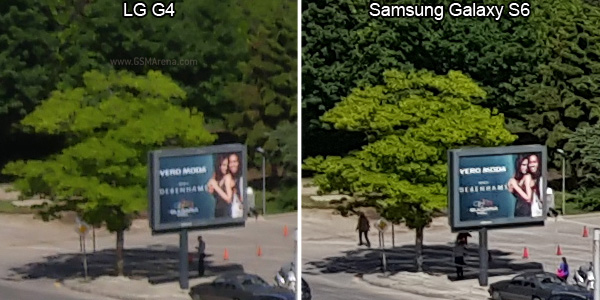 At full magnification (like these crops) it's pretty easy to spot the heavier sharpening applied by the Galaxy S6. However, most photos will not be viewed at 100%, a 4K TV has an 8MP screen. When a photo is downscaled to match the display resolution, the end result looks better if some sharpening was applied beforehand.

The LG G4 has a wider dynamic range, which shows when there are a lot of shadows alongside brightly lit areas in the shot. The Galaxy S6 is a good performer in this area, though it underexposes shadows quite often while highlights get overexposed rarely, but still more often than the G4.

Here's a look at the problem areas - red spots are overexposed, teal bits are underexposed. The histogram is quite telling as well, the Galaxy S6 photos bump up against both the upper and lower bounds while LG G4 photos have some breathing room. 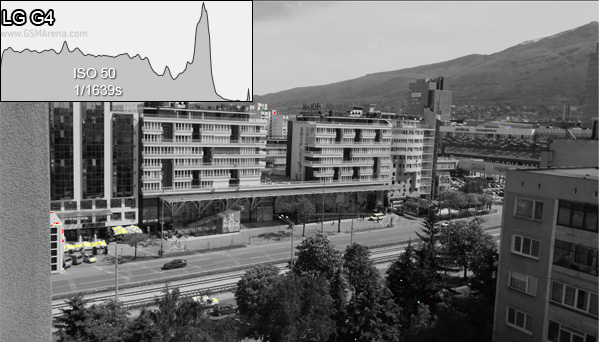 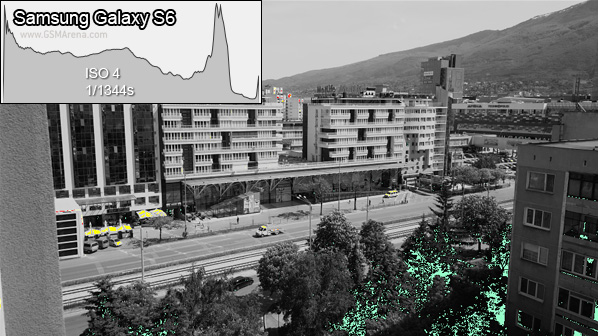 Note that we had some issues with missed focus from our LG G4 unit, we even had to go back and reshoot a couple of locations even though we take multiple shots of each and pick the best one.

You can view the full images used for the crops if you want a deeper look into the image quality.

Winner: Samsung Galaxy S6. It's a precarious victory that LG could steal with a software update. The Galaxy S6 handled the balance between noise reduction and sharpening better, leaving more of the fine detail.

The LG G4, however, has the better dynamic range and it resolves slightly more detail (which gets lost in the post processing). The Color Spectrum Sensor results in a more accurate white balance, though color rendering is still off. The missed focus is worrying.