Update, Apr 04: We recently received a retail G5 review unit and we've updated all camera samples on this page accordingly. The good news is that there were almost no differences compared to our pre-production unit (except for a sharper wide camera on the new unit) so all initial review conclusions are still valid. Still, we've made sure to replace most camera samples you'll see below.

The camera is shaping up as a major selling point for the LG G5, just like it was for the G4. It has inherited all the camera goodies of its predecessor such as the Laser Auto Focus, the Advanced OIS and the Color Spectrum sensor from its predecessor.

That aside, the new flagship now comes with a dual shooter setup on the back. You can capture the scene with either a 135-degree Ultra-Wide Angle camera or with a more conventional 75-degree field of view camera.

The extra spatial awareness comes courtesy of an additional 8MP shooter on the back. It sits alongside the 16MP F/1.8 camera, which looks to be identical to the one on the LG V10 back.

On the software side, the phone is not only smart enough to quickly let you choose between shooters depending on how wide a view you want to fit inside the frame, but it can also leverage the two cameras to produce various shot effects. 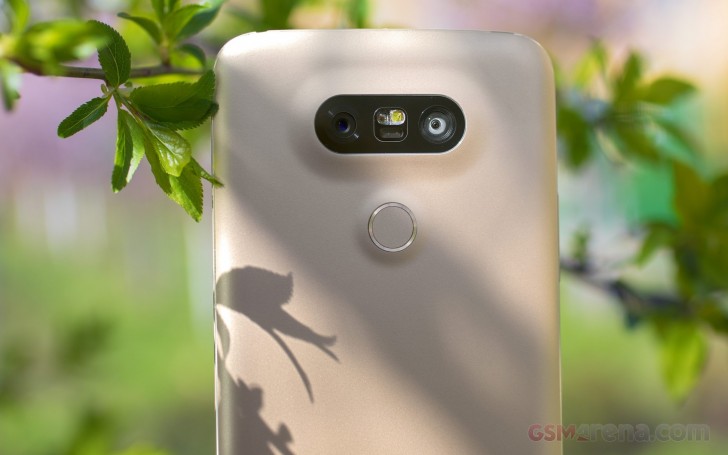 Pop-out Picture is quite self-explanatory - it combines the picture of both cameras, but the image from the main 16MP snapper pops out at the center. You can apply four different effects for the pop-out mode - fisheye, B&W, vignette, and lens blur. You can have more than one of those active at the same time, offering lots of creative freedom.

The multi-view setup allows for simultaneous shooting with two or all three cameras simultaneously - both videos and picture. You can choose the layout of the images.

Switching between the two snappers is easy - there are two dedicated shortcuts at the top of the viewfinder. By the way, you can choose the layout of the viewfinder as well - there is a simple one with just the shutter keys, auto - the one we are used to, and manual with extensive list of controls.

Indeed, the dual-camera setup has successfully allowed LG to make the G5 stand out. The Pop-out and Multi-view samples allow for quite a few creative uses, but having a wide-angle camera which can snap a panoramic shot in an instant is very cool among all others.

The 8MP snapper is 135-degree wide, which is so wide that in the beginning we used to capture our own fingers in the ultra-wide photos. The focus on this one is fixed and while image quality is nothing spectacular, once you downsize these photos for social networks or desktop wallpapers they look quite good.

You can clearly see the field of view difference between the two snappers here: 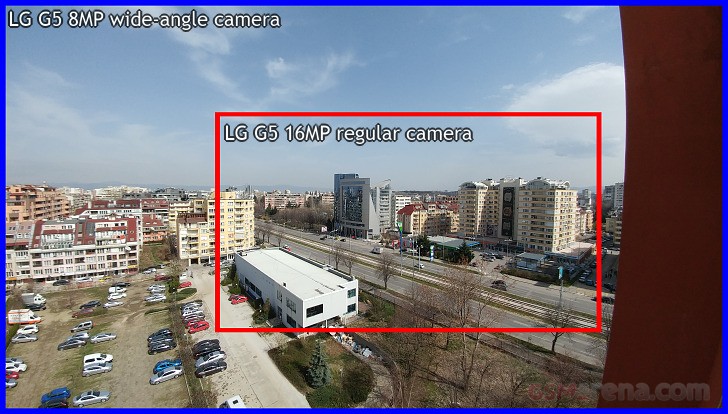 Here are a couple of wide shots we made for you. They offer uninspiring level of detail, but very good contrast and colors, plus, the dynamic range is definitely among its pros.

Now, let's talk about the main 16MP camera. The image quality is very close to what we saw from the LG V10, and quite impressive. The produced photos are rich in detail, with little noise to get in the way but come out with strong, artificial sharpening. The noise reduction can be too aggressive on some spots though, while it's helpless in other areas.

The colors are fairly accurate, the contrast is very good, as is the dynamic range. While it's no HDR, it manages to capture more than enough detail in the shadows, while keeping the highlights in check.

The HDR mode (on, or auto) can be of great help - it rescues the highlights and also opens up the shadow detail. It boosts the sharpening, however, creating small halos or visible fringing.

Here are a few samples of LG G5's HDR.

The Panorama mode stitches images perfectly and creates an image just over 5,000px tall. The final image is as sharp as a single photo, though an Apple-like HDR mode for the panorama would have been helpful. Even without it, the dynamic range should be good enough for most shots.

The 8MP selfie snapper does the job - it resolves enough detail, the contrast, and the colors are good. You can use the screen as a flash, which is nice. The pictures are perfect for social sharing, and we could not want anything more.

The selfie snapper supports Auto Shot, which automatically takes a picture when your face becomes still - you don't need to do anything - just smile and the phone will take the best picture for you.

The LG G5 is more than capable of pulling its own weight in our Photo Comparison tool. You can see it puts up an excellent fight against the other snappers we've tested.

Update, Feb 24, 2017: LG G5 recently received the official Android 7.0 Nougat update, and it adds 1080p video recording at 60 fps. You should look for the new option in the Aspect Ratio settings, which is a bit odd.

The 4K videos have 48Mbps total bitrate. They are as smooth as 30fps videos can be and the image quality is excellent - plenty of detail, low noise. The colors are identical to the still photo camera, as is the dynamic range, white balance, and contrast. Overall - the 4K video samples taken with the LG G5 are among the better ones we've seen so far.

The 4K samples taken with the 8MP FF wide-angle camera came with a good amount of detail, lively colors, and good contrast. You can check both 4K video samples from the playlist below.

1080p videos are shot at 17Mbps and the quality is great. At this resolution, you get the option to enable digital image stabilization, the Steady mode. However, this will shrink the field of view noticeably. But if you really need wide FOV, then just switch to the other camera - its samples are equally great though not as sharp towards the corners. Watch both samples from the playlist below.

Regardless of resolution and camera, the audio is recorded in stereo at 156Kbps. While we would have appreciated a higher bitrate, the mics are very good and you can hear even the most delicate details in the scene.

We also shot a couple of Pop-out videos in case you are interested. They offer four effects - black and white, lens blur, vignette, and fisheye, and you can combine those whatever you like.

The optical image stabilization does an okay job of smoothing out camera shake, but it can't correct the stronger jerks. The digital stabilization may well be worth it as it produces much smoother videos.

You can compare the 2160p and the 1080p video camera quality with other smartphones if you like. The LG G5 seems to be doing great in our Video Comparisons Tool.