The LG G5 is a most unusual phone - too bad you wouldn't know it at the very first glance. We've been sort of circumspect over the course of this review, but it's time to put it bluntly. The LG G5 may as well turn out to be the flagship with the least exciting design of the season. It's refined, but it lacks character. It comes with quite a lot of hardware innovations and yet it looks trite.

Funny actually, an LG G4 owner who loved the leather finish might find it hard to fall for the successor. These two phones are so different on the outside that they may have as well been made by different companies. We'd guess, it’s a part of the deal you know, the twist ending.

Let's face it. This is and isn't a phone like most of them. A Quad HD screen, Snapdragon 820, the latest Android and a fingerprint scanner meet the minimum requirements for membership in the elite club. This is where the story ends for some flagships. The LG G5's is just about starting to get interesting. 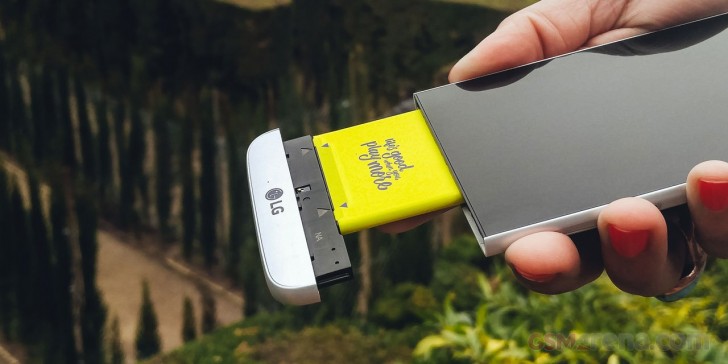 Snap it on, plug it in - if you're keen on getting the most out of your phone, the LG G5 is better at it than any other. The question is who would do that when the majority of people don't seem to mind the fact that the most they'll ever get to put inside a phone is a tiny sim card. We just don't get to tear our phones apart anymore, like we used to when it all started.

Laziness, habit, call it what you will, but this is where the industry's been heading for a while now with unibody designs. If LG can turn it around it would be a massive feat. In fairness though, it will take a lot more add-ons and probably successive (and successful!) generations of phones to build on the concept. And, most of all, users willing to make the extra effort.

So, yes, the Magic Slot is a true headline-grabber but the modular concept alone may not be enough to even the odds for LG. The good thing is it doesn't cost extra to have this technology at your disposal. If you're not too keen on tinkering with it, you can at least benefit from some extra peace of mind by carrying a spare battery in your pocket. And you're still getting one of the top performers of the season. Those are two perks that few flagship owners can enjoy simultaneously these days.

The dual camera setup on the back is what you can actually use every day on a variety of occasions. A super wide-angle backup to an already impressive imager is a great asset opening plenty of new creative possibilities.

Yes, the LG G5 is hardly the most attractive flagship out there but we were impressed with the excellent build and handling. There's an excellent screen, an amazing camera and a feature-rich software package. The battery life is acceptable even if average, and the swappable battery definitely compensates for that.

The Galaxy S7 is perhaps more attractive and even water-proof, but some may consider its 4:3 12MP camera as a downgrade. TouchWiz isn't everyone's cup of tea either, and the sealed battery may limit some of few despite the otherwise excellent battery life.

The Xiaomi Mi 5 is cheaper, but better looking and at least equally capable, though it can't match the camera and the memory expansion. The Mi 5 is also offered in just few markets, but if you are among the lucky ones, the omissions may as well be worth the price gap.

If water-proofing is a must, the Sony Xperia X Performance is a good candidate to consider. Despite its awkward name, the X Performance is very capable, it offers a top-notch camera, and a 5" 1080p display. Many value Sony for its tight integration with other consumer devices and the clean Xperia interface, so you should check it out.

The iPhone 6s Plus is more expensive, and inferior in all but design and performance. The Lumia 950 XL has the beauty of AMOLED and power of Windows 10 and Continuum, plus it costs cheaper, but everything else is lesser. Still, if either iOS, or Windows, are a must for you, go grab one of those.

The Meizu Pro 5 and Huawei Mate 8 are both exquisite flagship phablets made of metal, packing powerful processors, capable cameras, and rich software suites. If you are into the phablets, each of those fellas cost about €150 less than the G5 and are worthy of considering.

The LG G5 is as good as any current flagship at a time when flagships are inevitably more and more alike as makers wouldn't risk falling behind. It's hard not to appreciate LG for making the less obvious choice - probably knowing that there are easier, more obvious choices a user can make. Failure to monetize innovation certainly hurts but failure to innovate can kill you.