Another day, another official LG teaser for the upcoming G6. Following yesterday's very pink image that spoke about "reliability", today's teaser has thankfully returned to the blue hue, though it's a tad different from that used for the virtual assistant tease from earlier this month. Anyway, here it is in all its glory: 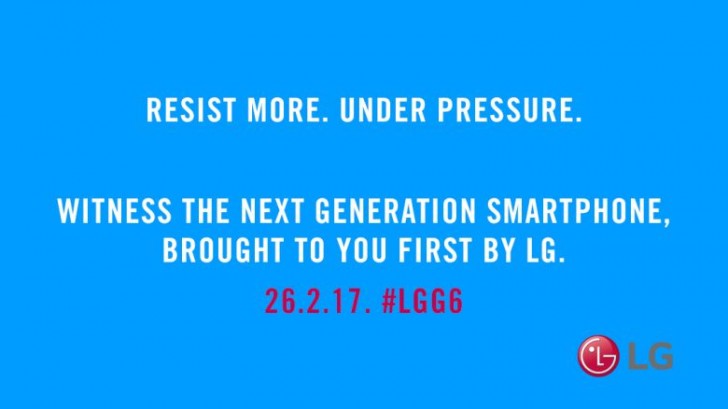 "Under pressure" isn't a Queen song in this context, it clearly has to do with water resistance. Add to that the word "resist" and the oft-rumored IP68 certification for water and dust resistance is all but confirmed. The G6 should thus be "dust tight", which is the best possible option, and will also be able to withstand submersion in 1m of water or more.

The LG G6 will be unveiled at an event on February 26. It's expected to come with an all-metal body, a non-removable battery (with "more than 3,200 mAh" capacity), a 5.7-inch 2,880x1,440 display, Qualcomm's Snapdragon 821 chipset, dual rear cameras, a fingerprint sensor, a quad DAC, and Google Assistant built-in.

The addition of waterproofing is welcome. But the lack of removable battery is not. Come on LG, you were the chosen one! You were supposed to save the removable battery, not leave it in darkness!

Hmm, are you researching the wrecks of the Titanic? Or are you looking for the remains of MH370?

Even moto g3 has ip67 rating and even the moto phones from 2013 or 2012 has a nano coating technology that can survive splashes.