The LG G7 ThinQ design is reminiscent of the recently released LG V30S ThinQ. But that's not a critique, this flagship season we saw little to none innovation in looks, in favor of major boosts to performance and camera. So, the LG G7 is your typical glass-sandwich phone with a metal frame, that won't wow with the shape as it keeps it basic and stylish. The beauty lies elsewhere, though.

LG has carried over the stunning hues the V30S is available in and has introduced a new one - New Aurora Black. The rest of the colors include New Moroccan Blue, New Platinum Gray, and Raspberry Rose. We'll avoid the strange naming so let's just conclude this section by saying they all look awesome.

The G7's display is unlike any other LG to date, but a lot like most of the current smartphones. It's a notched LCD screen but it has something unique to show off - the tallest aspect ratio so far of 19.5:9. Fitting such a tall screen while keeping a relatively similar footprint means tiny bezels, while its underlying RGBW pentile matrix promises high brightness and OLED-like sunlight legibility with up to 1000 nits outdoor boost. How about that?! 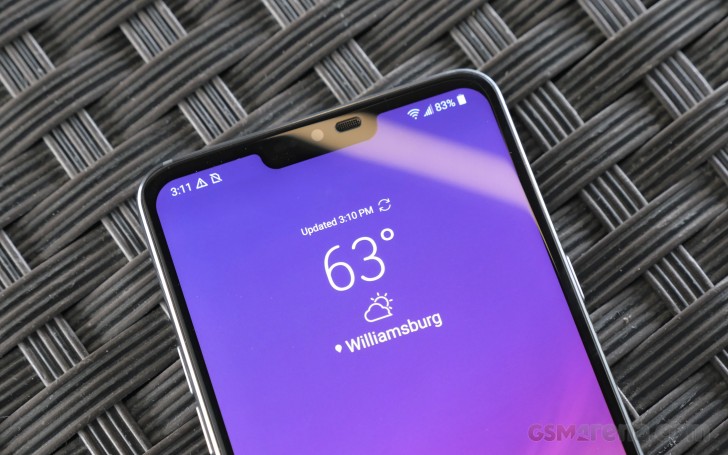 There is just one issue - the resolution of 3,120 x 1,440 px adds even more to the gigantic Android fragmentation. Some apps might have a hard time dealing with all those unique aspects and resolutions. The iPhone X had massive issues at launch because of the notch and that was just one new phone that had all the backup in the world from its maker. Imagine the hell Android developers have to deal with nowadays. 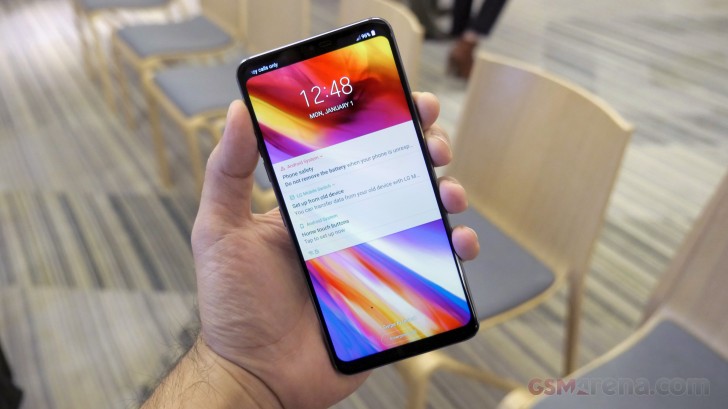 But the potential issues aside, the screen looks as promising as it sounds. Its covered by an almost flat Gorilla Glass with barely noticeable 2.5D-finish. The colors look lively, it was quite bright, and you could hide the notch in a Huawei-like fashion if you like.

One thing that might bother some users is the offset earpiece. The selfie camera is what occupies the center of the notch, flanked by a couple of sensors on the left and the earpiece grille on the right. The P20 has a similar arrangement and we found no usability issues, just aesthetic concerns. 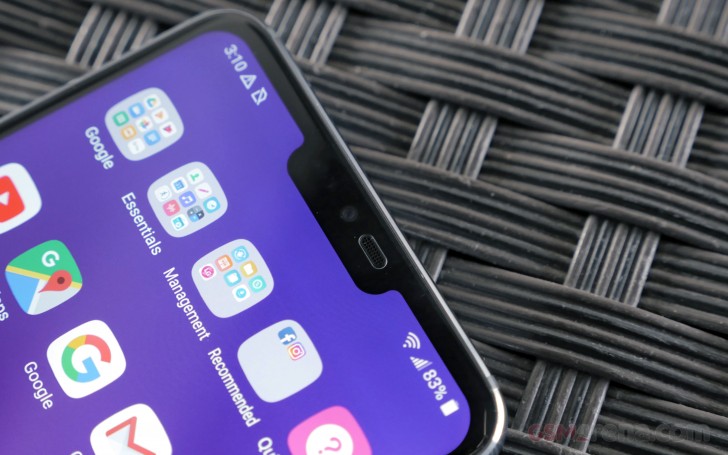 The aluminum frame is much thinner on the G7 than it was on the G6. This year it's not flat with chamfered edges, instead it slightly bends towards the front and rear glass panels. 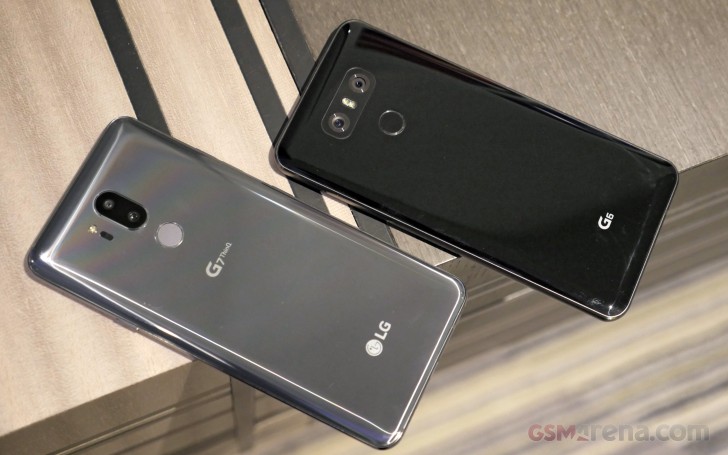 The back is made of one of those 4D-curved glass pieces. This means a flush center and four curves towards each edge. This curvy shape makes the G7 look thinner than it actually is, and arguably - prettier. It may compromise the grip a bit, but we consider it as a fair deal.

The fingerprint scanner is still at the back - LG was the first one to put it there. But for the first time ever on the G series it doesn't act as a power/lock key. It's just a biometric sensor. Instead, the G7 now offers a dedicated power key on the right side, comfortable - yes, but this might disappoint the hardcore G fans. 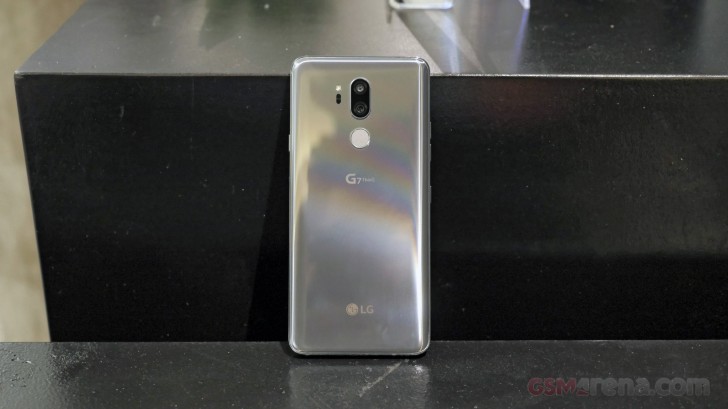 The LG G7 ThinQ has a dual-camera on the back, but for the first time for the G-series - the setup has a vertical alignment. The sensors and lenses are quite familiar - 16MP + 16MP with f/1.6 normal lens and f/1.9 super wide-angle lens. The resolution of the wide-angle cam has increased but we are yet to see how the new sensor performs. The camera benefits from AI, just like most of the phones today, but we'll talk about this later. 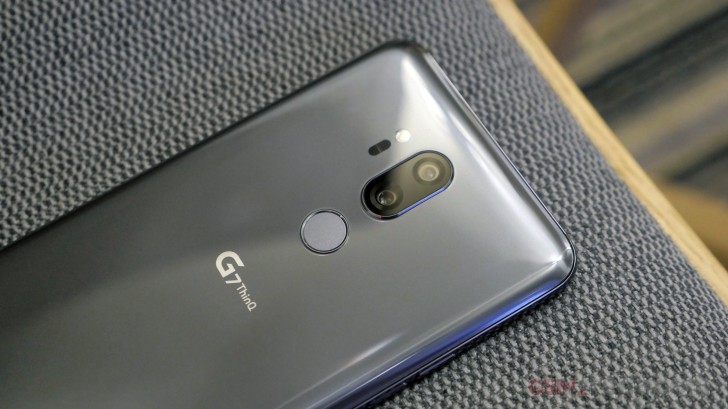 There is a new loud speaker firing from the bottom of the phone behind a three-dotted grille called Boombox. LG uses the empty space in the G7's hull as speaker chamber to amplify the sound (mostly bass) and promises room-filling loud audio. It surely sounded loud, but we can't wait to test it for real.

The G7 is among the few flagships keen on keeping the good ol' 3.5mm jack intact. It connects to a high-end 32-bit Hi-Fi Quad DAC from ESS and is complete with DTS-X codec. The latter can simulate 7.1 surround sound and it's the first time we are seeing it on a smartphone.

ThinQ stands for AI in LG's world and it even made it to the phone's model name. There is a dedicated hardware key on the left of the G7 (just below the volume buttons), which summons the Google Assistant. LG won't be allowing the option for changing its functionality at launch. Here's hoping this might change later on. 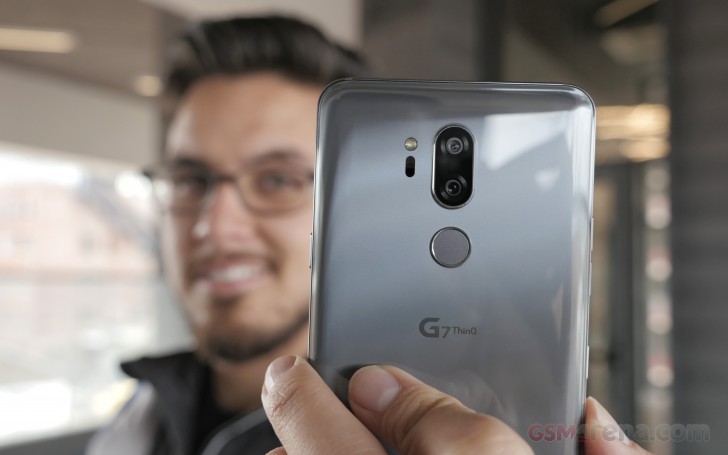 There is also this super far-field voice recognition possible with the new chipset, mics, and Google AI. The G7 can recognize your voice from up to 5 meters distance in noisy environments and launch Google's assistance in an instant.

Indeed, the LG G7 ThinQ looks promising and we are happy with its glass design and paintjobs. It's on par with the rest of the glass-sandwich phones we've seen lately, but when it comes to protection, the G7 beat them all..

In addition to the IP68 water-resistance rating, the phone is also MIL-STD-810G compliant for endurance to extreme conditions such as heat, moisture, and drops. It's a glass phone but features a special magnesium beam construction to dissipate shocks from drops. We are not sure how many drops it will survive, but it sounds better than the usual bunch of enhancements.