We’ve already seen a leaked press render of the LG G7, however we still look forward to the press event taking place tomorrow where the G7 ThinQ will officially be announced.

Some new details about the phone have been uncovered ahead of the event. Starting off with the model number, it will supposedly be the LM-G710. The display has already been fully revealed here. 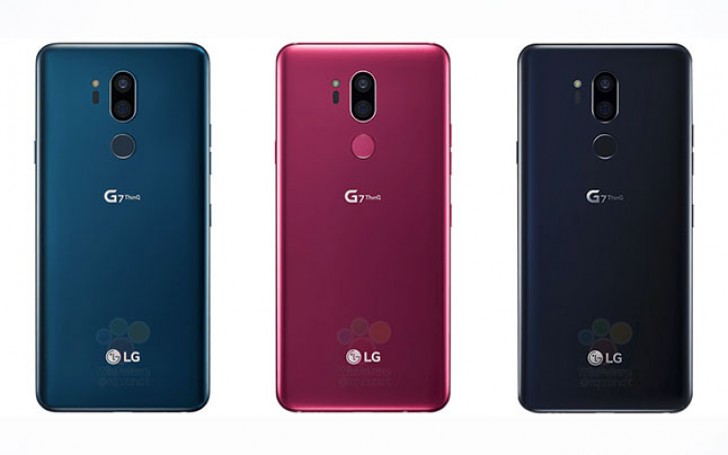 Of course, we’re expecting a Snapdragon 845 CPU and depending on the region, we might see 4GB or 6GB of RAM and at least 64GB of internal storage. Rumors haven’t confirmed whether the handset will support a microSD card – our guess is: yes.

There are two 16MP cameras on the back, both of which use an f/1.6 aperture. Still, it’s not clear if LG will use an ultra-wide camera or if it decided to go with a telephoto one for dual-camera features. There’s a 3,000 mAh battery that can be charged with the Quick Charge 4.0 standard.

Stereo speakers are said to be a feature here and we are also expecting LG’s QuadDAC make a comeback. IP68 water resistance is mentioned and the extra key is said to be a Google Assistant shortcut, so it’s not clear if LG will launch its own AI-assistant just yet. The renders you saw above show the phone off in three colors: Moroccan Blue, Raspberry Rose, and black. Check out the Source link for more angles.

Pricing is rumored to be under EU 680 for Germany yet still unknown for the US. All will be revealed tomorrow when LG will officially take the stage to announce its first 2018 flagship device.

Wow, I like the specs but the battery is low why? Indeed it looks like Mate RS

Hello moderators, I made an innocuous comment about the notch being bearable as long as the phone comes with headphone jack and sd card slot, and it got deleted! Come on! How does it contravene the posting rules? There are people bashing and name-cal...

So, even the wide angle camera is a question mark now?!!! It is the only original feature that makes LG stand out of the crawd. If LG decides to replace this feature with telephoto or another non-sense feature i will switch to other Android brand f...