With the new G8 ThinQ, LG has finally made the transition to OLED so you can benefit from a true always-on display function and those sweet deep blacks when watching videos. The G8 ThinQ doesn't compromise with resolution as well - the display offers a generous 1440 x 3120 px resolution (~564 ppi). All those pixels can be put to work achieving 100% DCI-P3 coverage and HDR10 support as long as you have access to HDR video content. 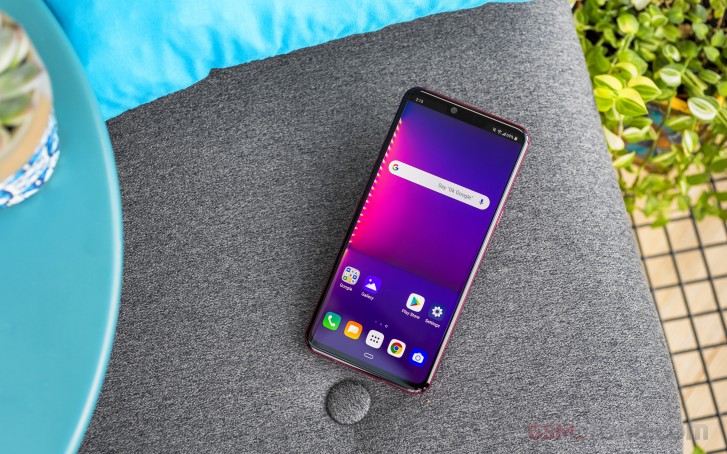 However, despite all the pros that OLEDs have over IPS, there's one setback that plagues this panel in particular - no matter what color mode you choose, the whites come out bluish. The overall color accuracy is pretty bad too so you might want to fine tune it with the custom color mode or use the True view feature that adjusts the color temperature of the display to match the surrounding lighting. It works pretty well in restoring the whites. For the record, we measured an average dE2000=7.6. Pretty much every color in our test patterns was off in some way.

The new OLED panel reached a max brightness of 655 cd/m2, which is quite good for an OLED panel. Of course, that level was reached when the phone was in a bright environment and brightness was set to Auto. In manual brightness mode with the slider cranked up to maximum, the display reached a maximum of 391 nits.

The new G8 ThinQ bumps up the battery from 3,000 mAh, on last year's G7 ThinQ, to 3,500 mAh but in the end, the battery life difference between the two isn't that big. The G8 ThinQ scored slightly better in the video playback test but worse in the web browsing scenario and it's because of the OLED panel. OLED panels don't do so well in our preconfigured set of webpages, which use predominantly white and light-colored backgrounds. That's expected, only the runtime we got from this one is lower than on the competing OLED phones.

The 3G talk and the standby scores were pretty good and they accounted for the 79h endurance rating. The LG G8's battery life is definitely dependable, but we've seen better screen-on performances in the class. 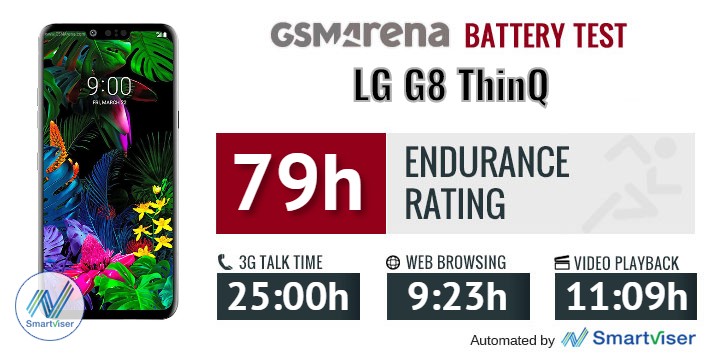 Our battery tests were automated thanks to SmartViser, using its viSer App. The endurance rating above denotes how long a single battery charge will last you if you use the LG G8 ThinQ for an hour each of telephony, web browsing, and video playback daily. We've established this usage pattern so that our battery results are comparable across devices in the most common day-to-day tasks. The battery testing procedure is described in detail in case you're interested in the nitty-gritty. You can check out our complete battery test table, where you can see how all of the smartphones we've tested will compare under your own typical use.

Fast charging isn't impressive either. We got just 42% in 30 minutes of charging from a flat battery. After all, we can't expect wonders from a Quick Charge 3.0-compliant charger and smartphone. And we've also tested the charging speed with the "Optimized charging" feature turned on and off and the results were identical. Perhaps it will slow down the charging speed when it reaches at least 80% in order to preserve the battery's health by not letting it overheat.

The LG G8 ThinQ uses a piezoelectric screen to produce sounds during calls but we've seen that on other phones too. What they are doing differently is that they employ both the piezoelectric screen tech called Crystal Sound OLED Speaker and their more conventional speaker tech with Boombox effect to deliver sound while playing music.

The conventional speaker is located at the bottom but the cavity inside the phone is used as a speaker enclosure for it, allowing it to sound louder and fuller. Due to this, you can feel the entire back of the phone vibrating with the sound. When you muffle the speaker at the bottom, you are only left with the sound coming from the piezoelectric screen which isn't as rich and covers only the treble. At least the sound is coming directly at you.

LG claims that for optimal listening experience, you should place the handset on a flat surface like a table or a desk. The sound will resonate and it will sound a lot better. However, we didn't find any noticeable differences and the overall sound quality is pretty underwhelming. We prefer the stereo loudspeaker implementation we've seen on other phones but this setup here isn't half bad either.

After playing with the sound settings, we found out that switching on the DTS:X 3D Surround feature found in the Sound sub-menu, the audio quality improved drastically. To be exact, the "Side to side" preset produced the best results - the sound coming out from the display was a bit clearer, the vocals were more pronounced and lively without ruining the bass.

In terms of loudness, we didn't find any noticeable changes when switching between profiles. We've seen louder speakerphones but this one's pretty loud nonetheless.

One big advantage of the Crystal Sound OLED Speaker over the conventional in-call earpiece, however, is the ability to hear the other side talking even when you are in extremely loud environments. That's because there's no driver that emits sound and it all comes from the vibrating screen, which in turn works better if you put it up against your skull instead of bringing it to your ear. Just like the headphones that work with bone induction. It's pretty neat and it really works to improve the in-call experience.

We'll have to conduct a bit more tests to see how it compares to the Huawei P30 Pro's implementation.

The LG G8 ThinQ delivered impressively accurate output in both parts of our test. All of its scores were perfect with an active amplifier and headphones caused next to no damage - a well-contained increase in stereo crosstalk was all there was to that.

The loudness wasn’t quite as impressive - the G8 ThinQ was below average in its default state, which is somewhat disappointing for a flagship these days. The good news is that enabling the QuadDAC option brings some extra oomph - enough to push the phone in the “Average” bracket. It also slightly improved the stereo quality with headphones, so we’d suggest keeping it enabled whenever you are listening to music.