The LG G Flex comes in a box with a concave top, matching the curvature of the device itself. The contents of the box are virtually identical to what we found in the LG G2's package - a compact charger (1.8 amps), a microUSB cable to go with it and a one-piece headset. The headset has in-ear plugs, tangle-free cables and a three-button remote.

The LG G Flex measures 160.5 x 81.6 x 8.7mm, which is what you would expect of a 6" device, but its curvature gives it a unique profile. The phablet weighs 177g, which is actually a bit below the norm for this size.

The basic design of the LG G Flex is that of the LG G2, again except for the signature curve. It's larger than the G2, but the curve improves landscape hold and makes it very comfortable to actually use as a phone - something phablets are not particularly good at. We're not sure about pocketability though - at least the flexible screen and body make it less vulnerable perhaps if you sit with the phone in your back pocket. Not that we tried.

The front has fairly thin bezels around the large 6" screen and is very clean with just the earpiece and the LG logo below the display. LG has long settled for on-screen buttons, though for some reason the company uses the old Back, Home, Menu arrangement (there are options to customize this, we'll get back to this in the software section).

Above the screen is the 2.1MP/1080p front-facing camera, the RGB notification light and the ambient light and proximity sensors.

Earpiece, camera and sensors • on-screen buttons, including a Menu key

The back deserves attention for its trademark design of having the volume rocker and power key just below the camera lens, but also for its special coating. It's a unique coating that heals itself if scratched. This means there's no need for a protective cover, the G Flex's back will stay unscathed even without one. In terms of looks, the back glossy with a brushed look, not unlike the LG G2. 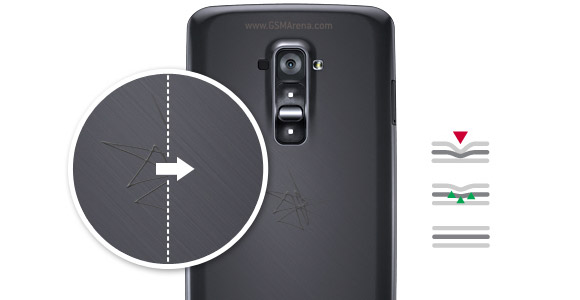 There's an LED that illuminates the power key (blue light only), which acts as a notification light just like the RGB light on the front. LG's software allows you to enable which apps can use the LED separately for the front and back.

Symmetrically around the camera/volume rocker/power key center line are two small squares, one of which is the LED flash and the other is the IR blaster. This is an unusual place to put the IR blaster, but it's actually better than putting it on top (which is a throwback to remote controls going decades back). With this design you can hold the device as a phablet rather than a remote when you control your equipment.

The camera and controls assembly on the back

Going back to the camera, it's a 13MP shooter with f/2.4 aperture, which can record 1080p video at up to 60fps. Unlike the LG G2 camera, however, this one lacks optical image stabilization (OIS).

The back of the LG G Flex also features the loudspeaker.

The bottom of the phablet houses a microUSB 2.0 port with SlimPort functionality, meaning it doubles as a TV-Out and USB Host with the proper adaptors. The audio jack is at the bottom, just like on the G2. Also here is the mouthpiece, the secondary microphone is on the top side of the device.

microSIM port on the left • nothing on the right

Under the back cover is a one of a kind flexible battery. It's a curved Li-Po unit with the massive 3,500mAh and it is, of course, non-removable.

True to its name, the LG G Flex can indeed be flexed but it takes effort. You can put it face down on a flat table and push down until it's straight and you won't damage the phone. There's no practical use for this other than to impress your friends.

The curve improves ergonomics - your fingers move in arcs rather than a straight line - and the way the device can slip in and out of pants pockets. Portability in coat pockets and purses is actually hurt a bit by the curve as the phablet tends to take up more space than a flat, 8.7mm thick phablet would. And while you can slip it in your pants pocket, we suspect most 6" phablets spend most of their time in coats, purses or backpacks.

The curve does have an additional advantage of keeping most of the surface away from a table. If you put the G Flex face down, the screen will be away from the table and if you put it on the back, only the middle bit will be exposed to scratches. We should note that there's no wobble whatsoever either way.