The 7" display on the LG G Pad 7.0 has a resolution 800 x 1280 px, which results in a pixel density of around 216ppi. The number isn't particularly indicative of impressive sharpness. Held at arm's length we'd say the lack of sharpness is noticeable but not a huge issue - it's when you look closer that things start to look pixelated.

The IPS matrix of the G Pad 7.0 screen helps with viewing angles and colors look good.

The pixel arrangement of the LG G Pad 7.0 is a classic RGB matrix, with equally sized red, green and blue subpixels to each pixel. 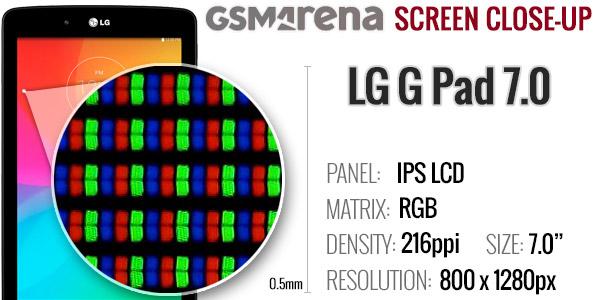 The screen of the LG G Pad 7.0 has good contrast, reasonable blacks, but less than stellar brightness. The screen is very dim, even at maximum brightness - it will do at home in the evening but will be of little use outdoors, especially since it's exceptionally reflective.

The LG G Pad 7.0 has a 4,000mAh battery and, given that it isn't the most powerful tablet and the screen isn't particularly bright and pixel-rich, the battery capacity should be more than enough.

The LG G Pad 7.0 posted quite impressive numbers in the browsing test and did well in the video playback. The G Pad 7.0 reached almost 19 hours of video playback, which is insanely good. Keep in mind that this test isn't performed at the highest screen brightness setting, but rather at about 50%. 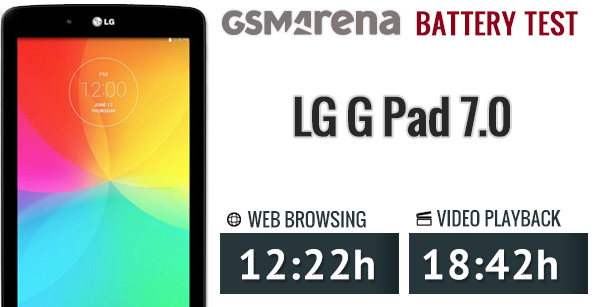 The G Pad 7.0 did a great job in web browsing as well - lasting 12 hours and 22 minutes. To put things in perspective, here are the results of other tablets we've tested.

The not so powerful chipset is easy on the battery, which is of ample capacity to begin with. Another point in favor of the affordable G Pad 7.0 - its battery backup is solid, to say the least.

Our battery testing procedure is described in detail in case you want to learn more about it. If you are interested how these results compare to other tested devices, check out our battery life test result table.

The LG G Pad 7.0 comes with a reasonable set of connectivity tools. The unit we're testing in this review is Wi-Fi-only. There's an LTE variant of the LG G Pad 7.0 that will soon be available for some regions.

There's dual-band Wi-Fi a/b/g/n, Bluetooth 4.0 (not high-speed), there's a GPS with S-GPS for faster localisation (with the help of your Wi-Fi network) but no GLONASS support, and an IR blaster that can control a TV (or other IR-supporting devices via an app). USB On-The-Go is supported. There is no wired TV-out functionality such as MHL or Slimport or a dedicated HDMI port.

There's no FM Radio on board the LG G Pad 7.0. Finally there's a microSD card slot that supports cards of up to 32 GB.

LG has implemented its QPair app that pairs to an LG smartphone and can transfer notifications between the devices. More on that in the software part of this review.