The Gallery stacks photos and videos together in albums, which can be organized by the date they were taken or the source they come from. Location-based sorting is also available, or you can have the Gallery display just your videos - especially useful as the G Pad 7.0 doesn't come with a dedicated Video player app.

The gallery supports viewing your images in their full resolution. You can easily pinch-zoom to 1:1 magnification and beyond.

The video player on the LG G Pad 7.0 is basically a view-only-videos setting of the Gallery app. Controls-wise you get Play/Pause, fast-forward, and rewind buttons, in addition to a slider to scrub through the video. Scrubbing through the video doesn't give you the animated preview that we saw on the LG G3 and there are now captions either.

Videos support subtitles and you hand pick the one you want. QSlide is also supported for the video player - you can pop out a video to watch as an overlay to any other screen on the G Pad 7.0, adjust the size of the pop up window and also its opacity.

The LG G Pad 7.0 played most of the files we threw at it. It didn't manage to output audio when we played AC-3 and DTS audio codecs in video and played to load MKV, MOV, WMV and FLV videos, AAC audio coding was fine along with MP3 and FLAC. AVI, MP4, MPG, DivX and Xvid videos weren't an issue for the tablet. 1080p was the maximum resolution at which it managed to play files.

Some files were jittery with a couple of lost frames but mostly things played smooth.

LG's music player on the G Pad 7.0 looks and operates the same as its counterpart on the LG G3. Your music library is organized by various categories, with the Album view being the most interesting thanks to its large album thumbnails.

The LG G Pad 7.0 showed it's capable of producing nicely clean audio output in our test. The tablet posted some excellent scores in both parts of our test, suggesting that all tracks it handles will sound just the way they were meant to do. Its stereo crosstalk with headphones attached was particularly impressive and one of the best we've ever seen.

However, the volume levels of the slate left a lot to be desired. The LG G Pad 7.0 was below average when plugged into an active external amplifier and downright quiet when used with a pair of headphones. We are used to seeing smartphones do better than this and tablets are usually way louder, so we can't give full marks here. 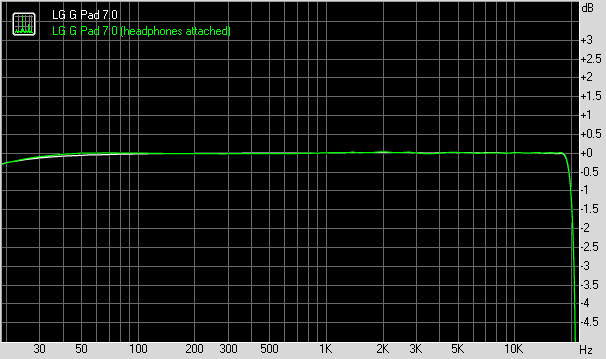