The LG G Pad 8.3 uses a near stock Android gallery with a few custom touches here and there. It automatically locates images and videos no matter where they are stored on the phone. By default, images are sorted by albums, but you can sort by location or time as well.

The Gallery app displays images in full resolution. Zooming and panning involves no lag whatsoever on the G Pad 8.3.

The music player on the LG G Pad 8.3 features an interface optimized for tablets, with tiles to switch between songs, albums, artists and more along the left side rather than on top like on most Optimus smartphones.

A tap and hold on the album art will bring up a search menu, if you need to look up the title, artist or the album. After that you can pick where to search - your music collection, YouTube or a general Internet search. Flipping the device to landscape mode while on the Now playing screen squeezes in a list of other songs by the same artist.

There are equalizer presets which are available without having to plug in headphones, but are missing the Dolby Mobile and Headset enhancer effects found on some LG smartphones.

The video player on the G Pad 8.3 has a fairly simple interface, giving you just a grid of all the videos on the device. There's an alphabetical scroll to help users locate videos faster but that's about it. You can, of course, play videos from the Gallery if you prefer its folder-centric organization. For each video you've started, the thumbnail gets a tiny clock icon, which shows how far into the video you are.

To get the basics out of the way, the available controls during playback include a scrubber for jumping to various parts of the video along with the standard play/pause and skip buttons. There's a pop-out button at the bottom right corner too, indicating that the app is part of the QSlide functionality of the UI. LG have implemented MX Player-like controls too - a swipe left or right will move the video forward or backwards, while a swipe up or down will tweak brightness.

The LG G Pad 8.3 handled everything we threw at it - DivX, XviD, MKV and MP4/MOV up to, and including, 1080p resolution. The AC3 audio codec (among lots of others) is supported, so you don't have to worry about the sound. There are were no issues with higher bitrates and file sizes, either.

LG took Samsung's pop-up play feature a whole lot further with QSlide. In the latest iteration of the user interface, LG has added a new batch of apps that take advantage of the functionality. Those include the web browser, Memo, QVoice, Calendar and Calculator. Furthermore, you can launch any of them from the notification drawer.

QSlide lets you watch a video while using the smartphone

Audio quality is good if not the best

The LG G Pad 8.3 did quite well in the first part of audio output test. Its loudness levels were about average, but everything else about its performance was top notch.

The thing is the degradation when you plug in a pair of headphones was more than we are used to seeing from high-end smartphones, let alone tablets. Stereo quality worsened by more than the average amount, some intermodulation distortion crept in and the volume levels worsened. The overall performance is still good, but not quite spotless. 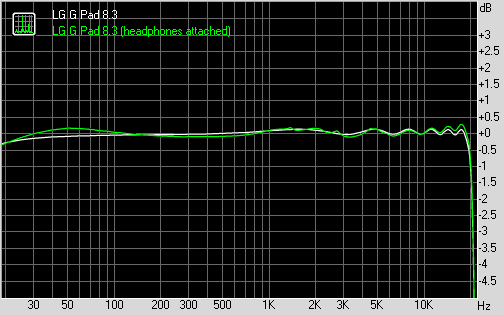