As another exciting phablet shootout draws to a close, it's time to look back at who did their homework better. To a great extent, the fight between the G Pro 2 and Galaxy Note 3 decides which phablet will stand as the benchmark for the rest of the Android pack to try and beat.

Last year was a good one for LG - the Optimus G Pro held the best phablet crown for nearly six months before the Note 3 came around, while the G2 will remain the best smartphone on the market at least until this year's MWC debuts start hitting the shelves. Unfortunately, supply shortages and less than stellar marketing prevented Korea's second largest manufacturer giving Samsung a proper scare and throwing a proper challenge to the number one Android phonemaker.

As it turns out, the LG G Pro 2 missed a chance too to take a hardware edge on the Galaxy Note 3. Coming to market a good five months later than the Note 3 is a serious advantage, but LG didn't seize it the way it did with the original Optimus G Pro.

Nevertheless, LG did its best to produce a worthy successor of the G Pro. The company's latest phablet is looking extra sharp and the rear-button layout is making a difference. That is, once you get used to it. 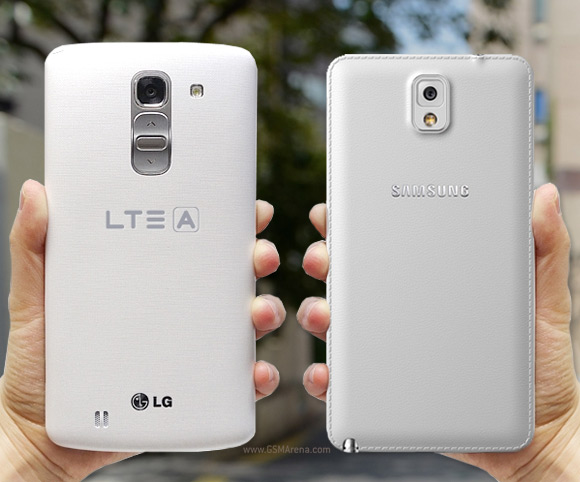 The larger, 5.9" display of the G Pro 2 offers more screen real estate, but doesn't match the sunlight legibility and contrast of the Note 3's 5.7" Super AMOLED panel. In terms of sharpness, there's virtually no difference as both offer superb quality.

The two phablets pack identical Snapdragon 800 configurations with the same CPU, GPU and RAM making the question of which one is faster redundant. Android 4.4.2 runs on both devices, with LG offering it out of the box on the G Pro 2, while an official update was recently made available to Note 3 users.

Both TouchWiz and Optimus are chock-full of both useful and gimmicky features. You are surely not going to use all of them, and even some you'll soon forget existed, but there's plenty of stuff that actually matters for the user experience. And picking between the two is more down to your aesthetic preference than anything else, as the feature sets are very evenly matched.

Similarities continue in the camera department. Both phablets record 4K video with their 13MP cameras, the Note 3 having a slight edge in the video recording quality. Come still photography however, and it's a real tie between the two - with (LG) of without (Samsung) OIS.

An identical 3,200mAh battery lies under the back covers of the G Pro 2 and Note 3. However, Samsung's phablet emerged from our dedicated test as the more power-efficient device with a good 10 hours more of overall endurance rating.

Then, there's the S Pen stylus. It definitely gives the Note 3 a productivity edge over the G Pro 2. The degree of precision and the extra level of interaction with the device (hover, link highlight) are an added bonus to the drawing and precise editing it enables. LG has also packed a lot of cool productivity tools with the G Pro 2, but nothing that quite matches the versatility of the S Pen.

All things considered, the LG G Pro 2 and the Samsung Galaxy Note 3 are as close as two devices from different manufacturers can get. However, having had an extra five months for development, this is hardly what the LG engineers should have strived for. And even after such a delay, they don't have enough exclusive features in response to the mighty S Pen. To make matters worse, the Note 3 has undergone a couple of price cuts (it now costs less than an 8GB iPhone 5c), so the G Pro 2 will have a hard time matching the bang-for-buck too.

So it appears the G Pro 2 will have to settle for those who don't need an S Pen or who are simply no fans of TouchWiz. It's not an ideal position and certainly not one LG hoped to be in but, at the rate the phablet market has been expanding, second best isn't too bad. And it's not a distant second either.