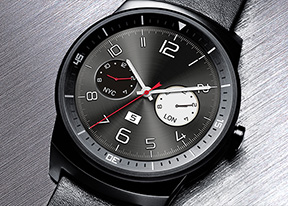 Android Wear is cool, but rough around the edges

The LG G Watch R runs Android Wear version 2.0 based on KitKat. Google is expected to update the OS with the latest Lollipop code in the coming weeks and months. For now though, every Android Wear smartwatch is running the same version, as Google is keeping things under tight control regarding custom manufacturer skins.

Because of this, the LG G Watch R UI is the same as the Moto 360 and the rest of Android Wear smartwatches when it comes to the user interface. Still, we've prepared a video of it in action to give you a taste of what it's like.

Announced at Google I/O this past summer, Android Wear is the company's take on how a smartwatch should behave. It has to be noted, that you need to pair it with an Android phone to be fully functional, though. Phones using other OS's don't work.

The user interface of Android Wear is organized in different cards, much like Google Now. A swipe from the bottom brings up all the notification cards that are pending on your phone and your Google Now activity. With the cards now active, a swipe to the left dismisses the current one and an opposite swipe shows contextual options for it. 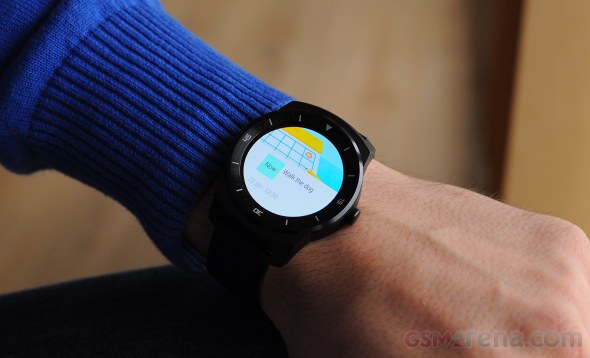 The cards harnesses the full power of Google Now and can also offer you navigation, calendar and note reminders. Android Wear allows you to interact with them as well. The navigation card is one of the coolest as it gives you turn-by-turn directions on how to get to your destination.

If you don't feel like getting notifications for a certain time, you can mute them by a swipe from the top. This will also show you the battery status and the date.

A single tap on the watchface brings up the voice command interface of Google Now. This is also activated by saying "OK, Google" when the watch is active. We found out during our testing that you'll have to be quite loud for the mic to pick up your voice. Nevertheless, voice recognition is superb. 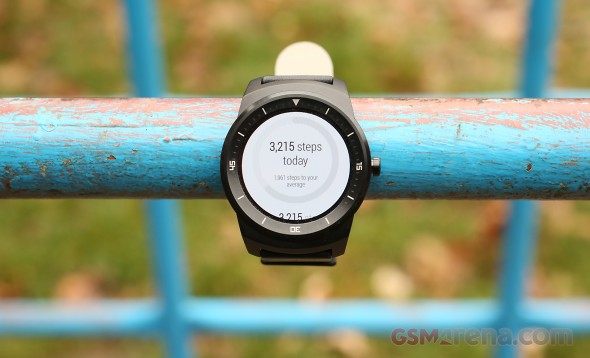 If you don't feel like talking, you can swipe up from the voice command screen and browse through the available options. Searching Google is just part of the story here, as you can directly manipulate the phone through the watch. You can take notes, set reminders, play music, open a stopwatch and measure your heart rate, just to name a few.

LG has preloaded a ton of watchfaces for you to choose from, ranging from classic to modern. There are also fitness and camping oriented ones for the more active folks. It's cool that each LG watchface has an active and inactive state. The latter shows up only when the watch isn't used and are minimal in design, taking advantage of the OLED display. 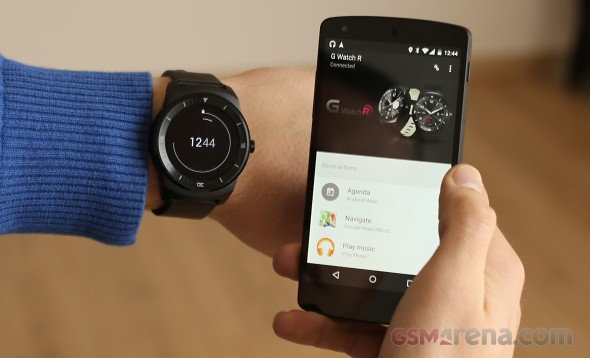 There's a small downside to this, as in the inactive mode the minute hand is not actively updated. When you wake up the watch back to active state (which happens even when you raise your hand to check the time), the hand updates and jumps over to the correct time, but not without you noticing it. That's a seriously annoying as anyone would expect their watch to show the correct time at any moment.

Of course, that's a minor nuisance, when compared to the quirks of the Android Wear user interface on a circular display. It's not too uncommon to see letters cut off towards the edges, making you unable to read parts of a message. 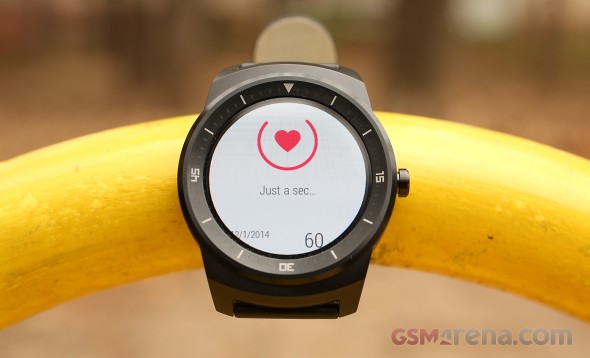 Pressing the crown awakens the watch and a long press gets you into the settings menu. There you can adjust brightness, see the connected Bluetooth devices, toggle airplane mode and get into the developer options.

You can also start Android Wear dedicated apps right on the smartwatch. Preloaded are Google Fit, Play Music and Google Keep. There are a bunch more you can install from the Play Store. For instance, you can have a go at a custom launcher or a custom watchface maker app like Facer.

The LG G Watch R is also controlled from the dedicated smartphone Android Wear app. It enables you to customize the apps opened upon the different voice actions. Changing the default music app from Play Music to an alternative is quite easy. The Android Wear app is mainly used to pair your smartphone with the watch and fine tune its settings. But regardless of Android Wear's imperfections at this time, the LG G Watch R performs outstandingly well. The Snapdragon 400 chipset and the 512MB of RAM are keeping the UI snappy and smooth no matter what you're doing, though admittedly, you can't do that much on the watch itself.

Overall, Google has made a lightweight, practical Android-based UI, which is user-friendly and it's nice to look at. We just wish there were more things you could do on the watch without a paired smartphone. For instance, as soon as your phone is out of reach (or out of battery), your notes or appointments are no longer accessible on the watch, even though it could have synced them in the meantime.