The LG Crystal comes with a high-res WVGA and relatively large 3-inch touch screen. That, along with the DivX/XviD support turns it into a potentially excellent portable video player.

Unfortunately, the only DivX videos we managed to play on the Crystal were those processed by the DivX converter on the supplied CD. But that's no surprise since we had exactly the same issues with the Arena and the Viewty Smart. The LG Renoir for example managed to play every desktop XViD/DivX video we threw at it.

To switch the video player to full screen mode you only need to rotate the phone to landscape position. A tap on the touch screen reveals the onscreen overlay controls. Alongside the standard controls (such as play/pause, volume, etc.) you can also change playing speed to 2x or 4x and to zoom in or out.

The Dolby for Mobile sound enhancement can also be applied during video playback on the LG Crystal. Of course, that enhancement is put to best use with headphones.

The Crystal comes with YouTube integration and you can upload videos to YouTube directly from the handset. Bear in mind that the option is available only in the video player and not in the file manager.

Unfortunately, the LG Crystal web browser, as with every other LG phone, doesn't have Flash support, so watching YouTube videos in the web browser straight from the desktop version of the web site is a no-go. The only way to watch your favorite videos is via the mobile version of YouTube.com.

Unfortunately and typically, the LG Crystal allows you to watch streaming media (of any type) only over the EDGE or UMTS connection, so in essence you cannot stream mobile YouTube videos over Wi-Fi. A real bummer, we know. The same strange issue plagues the Arena, the Prada 2 and the Renoir.

And since a lot of users don't seem aware of this fact, here's a tip - to watch any streaming video (such as YouTube) you first need to set up the dedicated streaming settings of the phone to use the same internet profile as your mobile web browser. The place you do that is on Settings row>Connectivity> Streaming settings.

One of the worst 8 megapixel cameras around

The LG GD900 Crystal sports an 8 megapixel camera with a maximum image resolution of 3264 x 2448 pixels. It boasts fancy Schneider-Kreuznach optics and a LED flash which, as you might have guessed, doesn't do much good. It might only make a difference in extremely dark conditions at the closest of ranges but don't expect anything beyond that.

The camera interface of the GD900 Crystal is identical to the one on the GC900 Viewty Smart. Access to all the camera settings is via the left taskbar in the viewfinder. There you get virtual buttons for flash, focus mode (auto/macro) and exposure plus an advanced settings key. This left toolbar auto hides when not used and you need to tap on the screen to bring it back.

On the right hand-side of the screen is another bar with a virtual shutter key, that also slides up and down to switch between still camera and camcorder. Alongside are the exit and gallery buttons.

This taskbar is fixed and actually not part of the viewfinder - that's the way to get around the difference between the wide aspect ratio of the screen and the standard 4:3 image sensor. If you don't like that, you can opt for the full screen view where a part of the image does get cropped but you see the center bit in more detail.

The actual Settings menu is a clever rotating dial with the available options for each setting displayed as a list. We have to admit that it is somewhat slow to navigate and find the right option but it is certainly very nice looking.

The LG GD900 Crystal sports a ton of extra camera features with geotagging, face recognition and smile shot being some of the most notable. You also get image stabilization and viewfinder grid to help you better frame your photos. The LG GD900 also supports up to ISO 1600 but unless you like looking at 8 megapixels of noise blobs, we would suggest you stay as far away from it as possible.

The image quality of the LG GD900 Crystal was somewhat of a disappointment. It might do the job if you aren't too fussy but any comparison to other 8 megapixel handsets on the market is to the phone's detriment. In fact the camera quality is absolutely identical to the LG Viewty Smart, and we thought that was pretty uninspiring.

If we have to say anything positive about the image quality it'd be that the colors are pretty decent and so is contrast in the photos. The amount of resolved detail is also good but the noise levels can basically ruin the whole deal.

The LG GD900 Crystal, along with the Viewty2, is by far the noisiest 8 megapixel camera we have seen so far and the difference is easily visible even at the lowest ISO settings. This is probably another handset to confirm the "more MP equals more noise" mantra. While we'd still pick it over most 5 MP shooters, the Crystal won't be our weapon of choice in the 8 MP game.

It seems that both Crystal and Viewty Smart use same 8 megapixel camera sensors with identical image processing algorithms, which as you see are not quite up to the job. We wonder why LG didn't put some extra work to fix the image quality on both devices, but let's hope changes can be made with future firmware updates.

We also snapped our resolution chart with the LG GD900 Crystal. You can check out what that test is all about here. 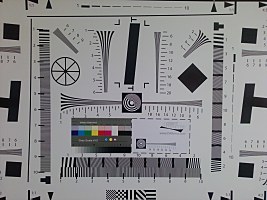 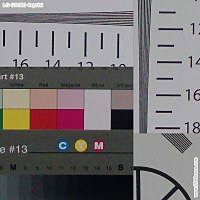 The LG GD900 Crystal is capable of capturing video of up to D1 (720x480) resolution at 30 fps. The video recording quality, unlike that of the still camera, is pretty good. The level of detail could have been a touch better, but the colors are lively with an extra notch of saturation added by the camera. The noise isn't at all that much of an issue here. Yep - exactly the same as the LG Viewty Smart.

The Crystal, just like the Arena and Viewty2, uses the outdated low-bitrate 3GP video format, which we didn't really like. We would much rather see more handsets like the LG Renoir, which uses the AVI file format with DivX encoding.

Slow-motion QVGA clips shot at 120 fps are also an option on the LG Crystal and the device, much like the LG Secret and Arena, takes the extra step of adding Fast videos. This is the time-lapse video capture seen in some dedicated digicams.

With the right subjects those shooting modes can be quite fun. Unfortunately, the output videos are still limited to QVGA resolution. The Samsung S8300 UltraTOUCH for example already shoots fast motion videos at VGA resolution of enviable quality. And as far as we know, those videos don't require more processing power than the device already has so why not.

The flash can be turned on to act as a video light. Quite naturally, you can also record sound with videos, except in the fast/slow-mo modes of course. As we already pointed out, the dedicated video recording microphone is on the back of the phone. Videos are encoded in MP4 but are saved in 3GP format.

Here goes a sample D1 video for you to check out.