Today LG unveiled some more details about the LG GD900 a.k.a. Crystal. The unique transparent keypad doubles as a touchpad and the handset will also support multi-touch. It also become clear that the keypad is made of glass, rather than plastic.

Update: It has now been officially confirmed by LG that Crystal will be dropped from the handset's name and it will be referenced as LG GD900 from now on.

The LG GD900 will run the LG's S-Class UI with a lot of touch-related goodies. The handset will feature multi-touch input as well as gesture support. This means that features like the two-finger zoom we saw on the Arena will be available for the GD900 users too.

There will also be some new staff on the LG GD900. For example writing an 'M' would launch the MP3 player and drawing a circle controls the volume. 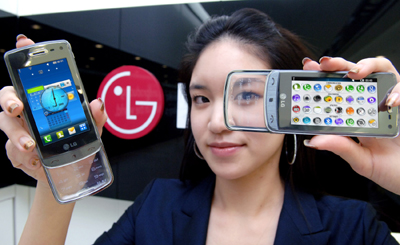 We are also more than pleased to know that the GD900 will have haptic feedback. The LG GD900 also has handwriting recognition, which isn't too frequent on phones with capacitive screens.

Some improvement is done in the web browsing department too. The GD900 will offer 'mouse mode' for a more convenient browsing experience. This means that you will be able to control a virtual mouse with your touch keypad, much like you would do on a laptop.

The LG GD900 will hit the European and Asian shelves in May but its pricing is yet unknown.

wow~ it's great! i am considering getting the KM900 (Arena) but was rather drawn back from the non-keypad interface. i think GD900 is the perfect phone for me! i totally love the design!^^