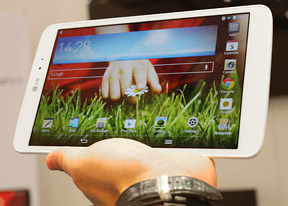 The G Pad 8.3 was announced a couple of days before IFA even started, but they're presenting it again and have a lot to share. For example, did you know that the south Korean government keeps a database of the hand sizes for citizens aged 20-60? According to that database the ideal width for a tablet is 127.3mm and the average jacket pocket is 130mm.

So, LG settled on a tablet that's 126.5mm wide and put the biggest display that would fit, which turned out to be 8.3". To do that LG made the bezels around the screen quite thin - it's easy to hold in one hand and the build quality is great. We liked the white one a little better than the black one, but the metal is the same on both.

The screen itself has 1,920 x 1,200 resolution and 273ppi. It's sharp with great colors, but unfortunately quite reflective.

The screen is sharp and with great colors, but kind of glossy

The G Pad 8.3 has an aluminum unibody that's 8.3mm thin (yup, just like the name) and feels fairly light for its size at 338g. The back has a nice brushed metal finish, but unfortunately it's a fingerprint magnet - our attempts to wipe it clean were not very successful.

The brushed aluminum back of the G Pad 8.3 • a close-up of the speakers

The back has a 5MP camera that can record 1080p video, it's positioned on one of the two plastic strips on either side of the back. Another two cutouts in the back show the stereo speaker grilles. There's a 1.2MP / 720p camera on the front too.

The top side of the LG G Pad 8.3 holds an IR blaster, the 3.5mm audio jack and the microSD card slot, which is covered by a flap. The G Pad 8.3 has 16GB of built-in storage. At the bottom there's the microUSB port.

One side of the G Pad 8.3 is bare, while the other one holds the only hardware buttons - power/lock key and the volume rocker.