The Prada has almost the same Music player as the LG Renoir. You can filter tracks as with any other up to date music player - by artist, album, genre, and recently played. User-created playlists are also an option.

There are no available visualizations. The only other option is Album art but it's a really nice treat as the album image gets as large as one third of the screen.

The music player is good

Naturally, the music player can run in the background. If you want you can control the music straight on the home screen with the dedicated widget.

The music widget and the second desktop music view

The player interface has changed a bit since the Renoir. Besides the larger album picture, the dedicated buttons for sound, repeat and shuffle are moved down to the right corner. And as you can see from the shots the three music buttons are bigger and more touch-friendly than on the Renoir.

The missing equalizer options in the Renoir are now history and the Prada 2 has five different presets available to the user.

The Prada comes with FM radio and you can use it either through headphones or through the loudspeaker. In either case you've got to have the headphones plugged in as they serve as an antenna.

The radio stores up to 50 stations and there is support for receiving two-line radio station info over RDS. Scrolling through stations is very easy and intuitive - you have quick access through the two rows of buttons below the main window.

FM radio has 50 stations worth of memory slots

The distortion levels are also one of the best we have seen recently. The frequency response graph indicates the existence of some mid and high-pass filter that cuts out the extremely low frequency sounds.

The stereo crosstalk reading however is simply disastrous. This is an anti-record in our test indicating that the handset is basically lacking stereo capabilities – a good portion of what is played in one channel is also received through the other. However the score is so bad that it almost certainly has something to do with the pre-release status of our unit.

Here go the results so you can see for yourselves. More info about the test can be found by following the link. 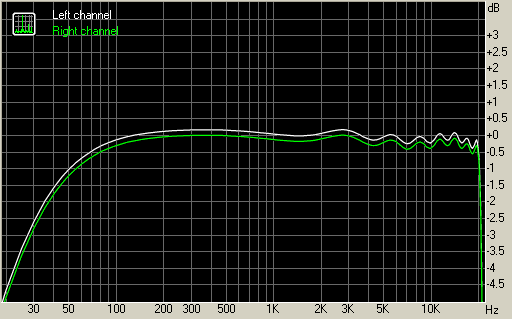 The LG Prada video player is among the most attractive features of the handset due to its support of DivX - still a rare feature on most mobile phones. This enhanced video support is not even listed in the official specs list or commercials, so we are pleasantly surprised.

The KF900 successfully played most of the DivX movies we threw at it walking in the boots of LG Renoir. However, the Prada does not do XviD at all - either officially or unofficially.

Thanks to the widescreen display, wide aspect videos are a treat in fullscreen landscape mode. The semi-transparent control overlay disappears in a few seconds or when you tap on the screen so they don't get in the way.

There's an elaborate video editor on board as well.

Video player: portrait and landscape mode • there is an elaborate video editor too

Online video - still in the dark

The new Prada does not come with any form of YouTube integration. You can't upload videos to YouTube directly from the handset as you can with the Renoir.

Unfortunately, the LG Prada web browser doesn't have Flash support, so watching YouTube videos from the desktop version of the web site is a no-go. The same holds true for the previous LG hi-end handsets too - Viewty and Renoir.

The only way to watch your favorite videos is via the mobile version of YouTube.com where videos get streamed in 3GP format over the RTSP protocol. If that's more mumbo-jumbo than you can handle, here's what it means.

The mobile version of YouTube found at m.youtube.com gets you access to the same videos as the desktop version, however they are of inferior in quality so that they can be played over the wireless carrier network - EDGE or UMTS.

Strange as it may seem, the Prada only allows you to watch streaming media (of any type) over an EDGE or UMTS connection (just as in the Renoir), - which means you cannot watch streaming mobile YouTube videos over Wi-Fi. This is odd since the Wi-Fi option is available in the streaming menu, but the Prada just refuses to accept it.

Perhaps the retail version of the device will have those bits and pieces sorted out.

And since we've noticed a lot of Renoir users didn't realize this, here's a tip for you - to watch streaming videos (such as YouTube) you first need to set up the streaming settings of the phone to use the same internet profile as your mobile web browser. The place you do that is in Settings tab>Connectivity> Streaming settings.