We just received word that the affordable touch handset LG KP500 is getting a pet-name - the LG Cookie. Despite the perky name, the latest LG handset offers a modern feature set that seems pretty enough for the estimated price of 170 euro before taxes and subsidies. 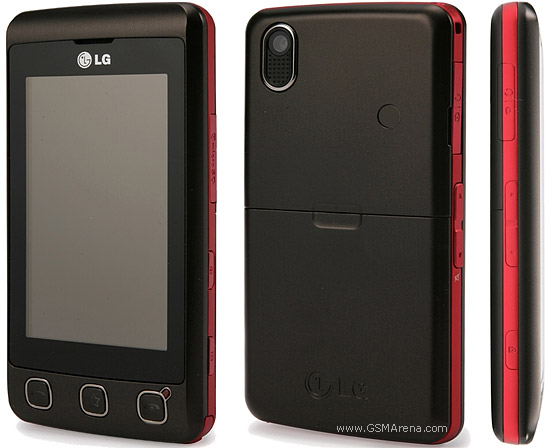 You can easily spot the family relation to the LG Renoir in the design of the LG KP500 Cookie. The Cookie uses the latest reincarnation of the proprietary LG Flash-based UI, which now is even more interactive and user-friendly. The interface is still thumb-optimized, but a stylus tucked in the body also assists handwriting recognition.

The built-in accelerometer of the LG Cookie allows for even more fun - it adds a physical dimension to the gaming experience, there is auto screen rotation for images, video and documents and finally, there's the landscape onscreen QWERTY keypad.

The other fun stuff to use your accelerometer for is aligning your home screen widgest - just shake the phone and you're done.

The LG KP500 Cookie is only 11.9mm thick, which presumably makes it the thinnest phone around with a tucked in stylus. The LG Cookie sports a 3-inch TFT touchscreen display and a 3 megapixel fixed focus camera. It doesn't have 3G support, but you have EDGE and quad-band GSM at your disposal.

The other new thing we just found out about the LG Cookie is that the video recording won't be as exciting as that of some other LG cameraphones. Here you'll have only QVGA video at 12fps.

Video playback is not stunning either - the LG Cookie won't support DivX or XviD - instead you'd have to do with only MP4 video at 24fps (up to 240 x 400 pixel resolution).

Nevertheless, the LG KP500 is indeed going to have a really attractive price point as promised - the estimated price is only 170 euro before taxes and subsidies. We duly expect this baby in our office for a review spin.

Until then be sure to check out the official LG Cookie demo video that we've published before here.

Please tell me how to enable streaming option on my LG KP 500.