The LG Liger (F490L) made a bold appearance before its official announcement – complete with specs, hands-on photos and even benchmarks and chipset info. The phone will join the LG G3 family with similar looks but a bigger display (5.9") and LG's own Odin chipset. 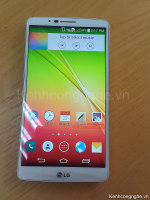 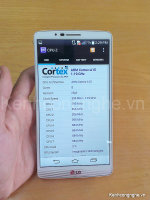 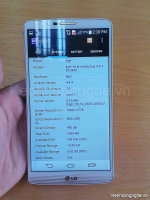 The chipset features four Cortex-A15 cores and four Cortex-A7. Initially we saw it clocked at 1GHz, now CPU-Z shows 1.2GHz as the top speed for the A15s. The app may have detected the A7 clock though, the A15 cores are allegedly clocked at 1.5GHz.

As a consequence the AnTuTu 5 score is not particularly impressive, even against the Snapdragon 801-packing LG G3. Considering the 5.9" IPS screen has been dropped to 1080p resolution, the LG Liger may be more of a mid-ranger rather than a flagship phablet. 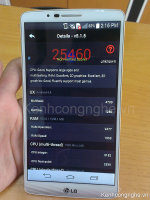 Thanks to hnl for sending this in!

So how crap PowerVR?, LG that was terribly stupid to launch a smartphone with a Qualcomm CPU and a GPU not compatible, Qualcomm Adreno have to be, Intel must be PowerVR, sees smartphones from Asus? has PowerVR GPU but with Intel, I'm BR and I had to ...

I'll be waiting for this product, hoping it will be lot cheaper than G3 since the benchmark is not too good.

Apple and IMG Tech are closely tied as far as software support is concerned, Apple gives you updated drivers with each iOS major release. This isn't always the case with Android phones sporting PowerVR GPUs. The support on Linux is also non-existent....