Photos and Gallery handle your images and videos

The gallery in Android 4.4 KitKat is called Photos and comes with new looks, functionality and a new user interface. Upon opening the app you'll see two tabs - Camera and Highlights. Above those two tabs you get the Movie, Search and Settings shortcuts.

The movie shortcuts allows you to easily select pictures and videos from which you want to create a movie and they will be automatically added to the brand new Video Creator. After that you can add music, stitching theme and voila - your video is ready with just a few taps. Nice!

Creating a movie straight from the gallery is very easy

The single photo view is updated too - below the photo there are three shortcuts - Edit, Share and Delete. That's it. The Editor allows you to crop, rotate or add filters to your photo.

The old gallery that premiered with the Ice Cream Sandwich is also on board. The Default view of the gallery is Albums, the first of which is always the Camera album, which has a camera overlay icon too. Rather than the familiar stacks, the app uses a grid of photos, two on a line.

Anyway, the single photo view is updated too - above the photo there are several sharing shortcuts and a delete button, while the underlying line of small thumbnails of all other photos in the album isn't present any more.

The video player is still not getting the necessary attention from Google and there's still no dedicated videos app (you have to go through the Gallery or Photos). The only supported format is MP4 up to 1080p resolution. That's it. There is no subtitle support.

Streaming videos to a Wi-Fi enabled TV is available. One way to go about this is to share your multimedia content over good ol' DLNA technology OR you can mirror your device's screen to the TV via the Miracast protocol.

Listen or stream your music via Google Play Music

Google's own music player called Play Music and it went through a major UI overhaul recently. It is now snappier and more beautiful. It features the spanking New Listen Now feature, which tries to determine what you like and the sequence of your track-changing so that it can start offering you music you might like to play next.

While the player is working, the entire lockscreen features the album art and track info for the current song along with dedicated playback controls. The notification area also lets you control the playback via an expandable notification.

Audio output is smooth but quiet

The LG Nexus 5 audio output was almost identical to that of the LG G2, which means the smartphone showed nicely clean output in both parts of our traditional audio quality test. However the volume levels here were even lower than on the LG's own flagship, making them below average.

The scores stay close to perfect even when you plug in a pair of headphones. The stereo crosstalk worsens a bit but the rest of the readings are virtually unaffected (frequency response actually improves a bit). Unfortunately, the volume levels remained just as uninspiring. 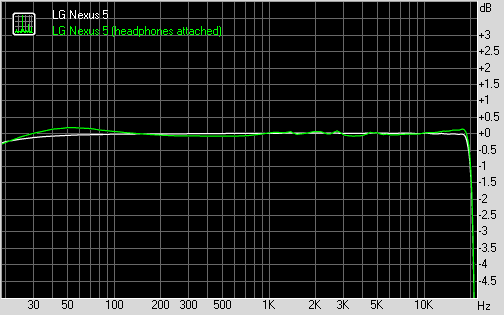