Having received plenty of tips about vastly improved image quality on the Nexus 5, courtesy of the Android 4.4.2 update, we decided to investigate. We used the same device to snap a series of photos. We first shot with 4.4.2, then downgraded to 4.4 and photographed the same things in a matter of minutes (just enough time for the flashing process to complete).

There are indeed differences, but we'd call them tweaks more than anything. We investigated three common scenarios - daylight shooting, HDR and low-light photography and we've prepared crops for all three.

The most notable change is white balance - we checked the three primary colors and found that the 4.4.2 camera saturates the greens less than the 4.4 camera. This improves the white balance, which had a subtle yellow tint (yellow is green + red).

Another change in the basic setup is exposure time - after the 4.4.2 update, the Nexus 5 prefers shorter exposures, which resolves more detail in the highlights compared to a Nexus 5 running Android 4.4. The downside of this is underdeveloped shadows.

A more subtle change is in the balance between noise reduction and sharpening. It seems that Google boosted noise reduction (some fine detail in the foliage or the texture of the building's exterior is gone) and restrained the sharpening. On Android 4.4 the sharpening was a bit too strong, you can see a staircase effect on some diagonal lines and some white halos.

The end result is minor and visible mostly to pixel peepers - less noise but a bit less detail too. 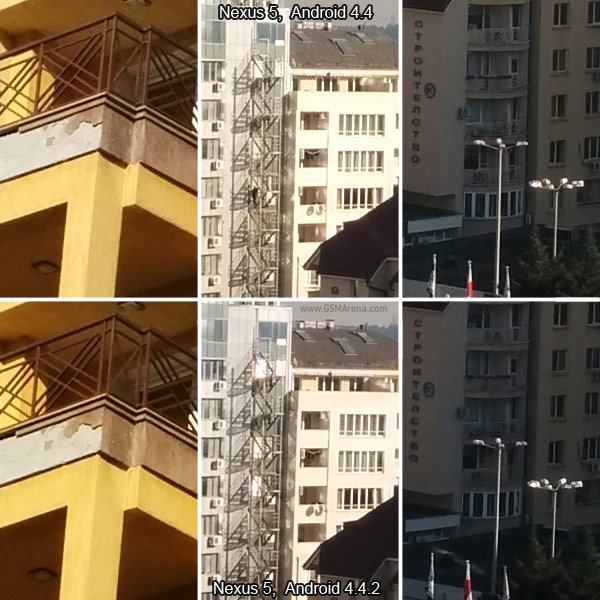 Here are the full resolution shots we used for the crops.

Next we tried the HDR mode. The biggest difference seems to stem from the new exposure time settings: the highlights are better preserved, but shadows are noticeably less developed. There's less noise in the highlights but, due to the lower exposure, some color noise has crept in the lowlights. If you like, you can have a look at the full resolution shots we took - both with HDR on and off.

Moving on to lowlight photography, the Nexus 5 offers three shooting modes: Normal (flash off), Flash on and Night mode (which forces the flash off). Lowlight shooting is the area the Nexus 5 camera improved tangibly after the 4.4.2 update. We've included two photos for each mode - the best and the worst - to show the effects of handshake.

In Normal mode with no flash, the 4.4.2 camera used a much shorter exposure time - 1/34s vs. 1/8s - which reduced the effects of handshake. Other than that, the slightly dialed up noise reduction ate up a small amount of fine detail.

The stronger noise reduction is needed here as the camera uses a much higher ISO to make up for the shorter exposure. Originally (with 4.4) the camera rarely exceeded ISO 200 even in poor light, while now with 4.4.2 it usually picks an ISO setting in the 500-700 range.

The exposure times with the flash on are more or less the same, but a noticeable change is the much better white balance. The 4.4 camera rendered the white wall in the background with a strong yellow tint, while the 4.4.2 camera did a better job.

Night mode also uses shorter exposure after the update, though it's actually the improved processing that makes for a better-looking shot. Strangely, the worst photo with Android 4.4.2 was shakier than the worst with 4.4, despite the shorter exposure. This is most likely due to chance, a stronger twitch of the hand, but it shows that some things can't be corrected with a software update (especially the bits running on the human operator). Check out the full resolution shots, they are arranged as in the crop - Normal, Flash on, Night mode with the Best photo coming first, followed by the Worst.

Something that can't be captured in a photo is the autofocus behavior. It was sluggish originally, but with the 4.4.1 update Google made it noticeably faster and that has been carried over to 4.4.2. Continuous autofocus is also smarter, noticeably less intrusive.

Updating the Nexus 5 to Android 4.4.2 is worth it in general (it brings improvements to the rest of the software, not just the camera). Even updating just for the camera's sake is worth the effort - more accurate white balance and slightly improved lowlight performance are nice.

The overall change in image quality isn't that great though, so don't expect photographic miracles after Android 4.4.2 finishes installing.