The leak storm is finally over, Google has just made the Nexus 5 official. The latest Nexus smartphone is manufactured by LG. It rocks a 4.95" LCD display with 1080p resolution, which adds up to a pixel density of 445 ppi. The good news keeps on coming with the addition of Gorilla Glass 3 for enhanced screen protection.

Inside the Nexus 5 is a 2.3GHz Qualcomm Snapdragon 800 chipset with four Krait 400 cores and Adreno 330 GPU. It's definitely not a slouch with 2GB of RAM and Android 4.4 KitKat at the driver's seat. 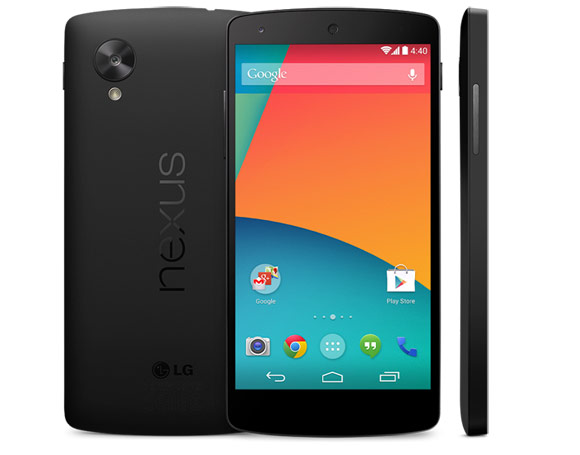 In a traditional Google manner, internal storage options are either 16GB or 32GB with no microSD card slot to be found. Below the back cover sits a 2,300mAh battery, which isn't exactly the largest we've seen on a 5" smartphone. However, it does support wireless charging, which is cool.

At the back, there's an 8MP with OIS and LED flash. The camera uses a 1/3.2" sensor and an f/2.4 aperture. The camera module protrudes a bit from the rear casing with a LED flash below it. At the front, there's a 1.3MP camera for video calling, too.

The Nexus 5 will be available in the US and Canada in North America, the UK, France, Germany, Spain and Italy in Europe, plus Australia, Japan and Korea (and coming soon to India).

By the way, the Play Store will also sell accessories for the Nexus 5 - bumpers and QuickCovers.

Update: Boy, that was quick. The US Play Store is reporting that the 16GB Nexus 5s are sold out just a couple of hours after the launch. If you managed to snag one, it should ship by November 8.

Both 32GB versions (Black and White) are still available, but who knows how long this will last. Hopefully, the other retailers will have more units available.

actually, @tonypdxi WCDMA Band 4 is the same as T-Mobile's AWS HSPA+ so it should work

the only down part of the Nexus 5 is! that it dos not have the 1700, and the 2100 Frequency that is most used by T-mobile so service will suck if your not in the LTE zone you practically do not have service of your on edge network or also known 2G I'...

What about battery and camera ?