Early on in Android's life phone makers and app developers took over the role of innovators, adding cool new functionality that the base OS did not have. Google has been incorporating the best ideas, but stock Android these days serves as a stable base on which value-added features are added by makers.

Google's innovation in Android mostly takes place in the internals, things like Doze that change how the fundamentals of the OS works. Even there Google is not without competition as basically every phone maker has its own power-saving implementation.

On the plus side, there's no bloat of features that may or may not prove useful, stock Android is a "Best of" album.

One of the niceties uses motion sensing to dimly lit a black and white version of the lockscreen - just enough to see the time and any new notifications when you pick up the phone or take it out of your pocket. You can tap the screen to get the full color picture.

This feature is called Ambient display and also triggers when a new notification comes in. There's no tap to wake though and its behavior was quite unpredictable - we found that often times it would not turn on as expected.

The lockscreen itself is very familiar - a clock, notifications and a couple of shortcuts (voice assistant and camera, instead of the usual phone and camera). Swiping down shows the quick toggles and the brightness slider. The camera however can be also triggered by double pressing the power button while the phone is asleep.

The one thing we wish stock Android would bring from the skinned implementations is the Auto brightness toggle. You would have to dig in the settings for that as the toggle is not available on the quick toggle dropdown.

The lockscreen • the notification area • expanding the Wi-Fi options

Other than that you can pick the large-size toggles, the ones you'll use most often (Wi-Fi and Bluetooth by default). Long-pressing a toggle or hitting its down arrow brings out additional details, e.g. Wi-Fi settings and detected Wi-Fi networks respectively.

Nexus Imprint is the native implementation of fingerprint reader support on Android. We've seen makers already roll their own, but this one will make a common base for all apps. Imprint can be used to authorize purchases and sign you into apps, not just unlock the phone.

The fingerprint reader on the LG Nexus 5X is excellent. The setup was very quick and painless, you place your finger on the reader 5-6 times and you're done (some phones make you do it a dozen times and then want the tip of your finger).

The reader is active even when the screen is off, just place any finger you've set up and less than a second later the phone is ready (having skipped the lockscreen altogether). 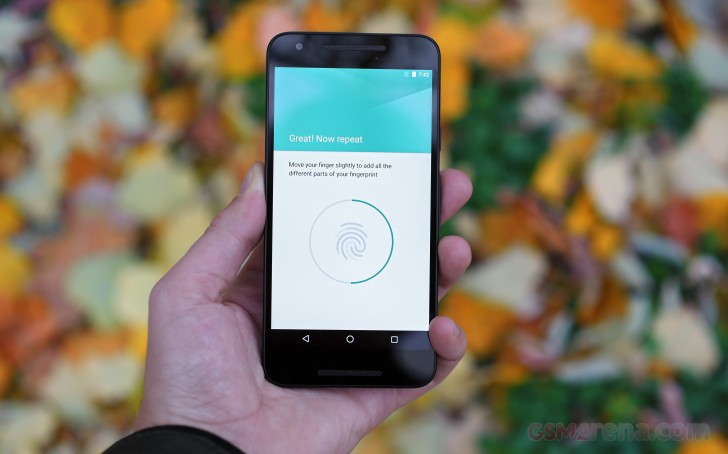 Google has developed a number of ways to reduce the hassle. Secure locks can be disabled in trusted situations. This can be anything from a trusted place, through a trusted device (e.g. your smartwatch) to three biometric options: your face (susceptible to doppelgangers), your voice and even your body (unlock the device once and it stays unlocked while it's on your person).

After all this talk about locking options, we're finally at the homescreen and there's not much here - the Nexus 5X has one of the leanest app packages we've seen. At first it has just a single homescreen pane and most of it is empty. Even the list off all apps fits on one screen.

Even so there's not as much free space as you would imagine. We have the 16GB version, the other option being 32GB, and there's 10.67GB left over for the user partition. And about 500MB of that is taken up by installed applications. So even a stock Android eats up a lot of your storage.

One thing, perhaps the biggest that the Google team continues to push back is the launch of multi-window support. Lollipop had the basics, but was never enabled in practice, same goes for Marshmallow. Several smartphone makers - even Apple! - have working, even good multi-window solutions but not stock Android.

Multitasking is done through the app switcher, a 3D rolodex menu. You can swipe apps to dismiss them. You can also check how much RAM was used by any app in the last few hours so memory hogs are immediately visible.

Another thing that has gained popularity, but is absent from the Nexus 5X, is theming support. To be fair, some of the most popular themes just make TouchWiz/Optimus/Sense/Whatever look like stock Android, but there are some fun themes out there too.

Multiple users are supported, you get an Owner and a Guest account to start you off. You can add more users, each with their own apps, their own wallpaper and so on. It's not a total division though, some settings (like Wi-Fi or app updates) affect all accounts.

We'd like to say that stock Android is perfectly smooth, but we experienced the occasional hiccup in animation as the phone transitioned between screens. With 2GB of RAM, the 5X should have enough for multitasking (though it's not much by 2015 standards), so we're not sure whether the fault lies in RAM, chipset or storage speed.

Permissions finally landed on Android. Each app - even the pre-installed ones - will ask permission before accessing your data. Once you hit "Allow" they won't ask again (you can revoke the permission from the settings). To save you from spammy apps, the Deny option comes with a handy checkbox to make the denial permanent.

Unfortunately, the feature relies on developers to updated their apps first in order to take advantage of permissions.

Also here is the Battery optimization feature. It lists which apps are not being optimized for minimal battery usage to make it easier to track down memory hogs. If this feature causes problems with some older apps, you can disable it individually.

Google Marshmallow introduces Android Pay for the very first time. The Tap & pay option in the settings menu helps you set up your mobile payment solution of choice. The default is the new Android Pay, but you can pick another one if you have it installed.

Google has further made sure that different payment options can co-exist peacefully by giving you the option to use the default payment option (say, Android Pay), unless you have another payment app open.

Naturally, any such app can use the fingerprint reader to ensure that people can't just pick up your phone and pay for stuff.

Unfortunately, there aren't any vendors in our neighborhood that support Pay so we couldn't try it out.