LG officially launches the Optimus 3D, to go on sale in Europe first

After announcing it months back in January, LG has finally launched the Optimus 3D, their first 3D Android handset and what LG calls the world’s first tri-dual architecture smartphone. 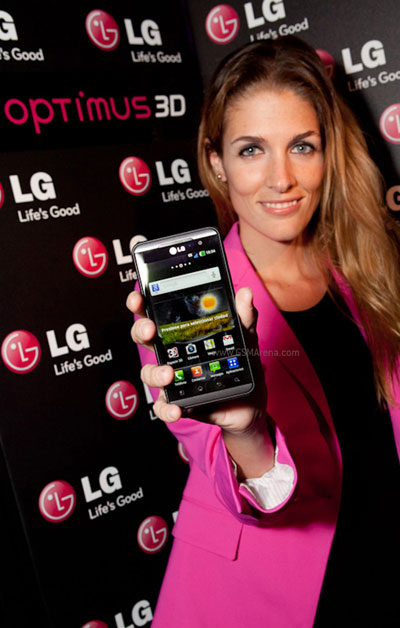 The Optimus 3D uses dual-core processor, dual-channel memory and dual memory, which gives it the aforementioned title. The dual-core part has become common now among most new high-end smartphones but the Optimus 3D is the fist to use dual channel and hence dual memory, which LG thinks makes it better and we must say we agree with them. Dual channel memory is indeed better and will definitely produce noticeable improvement in performance in certain applications.

Another feather in Optimus 3D’s cap is the 4.3-inch WVGA 3D display that does not require any kind of glasses. The phone can also record 1080p videos at 24fps and 720p videos at 30fps, all in 3D through the dual 5 megapixel lenses on the back.

The Optimus 3D runs on a dual-core 1GHz TI OMAP4430 processor with Cortex A9 CPU and PowerVR SGX540 GPU. It has 512MB RAM (2 x 256MB) and 8GB internal memory, which can be extended via microSD cards. Unfortunately, just like the Optimus 2x, the Optimus 3D is running on Android 2.2 Froyo.

The Optimus 3D will go on sale first in Europe and then in over 60 countries over the next several weeks. No prices have been mentioned so far.

LG has said this one to have twice the performance compared to other 1GHz dualcore smartphones due to the dualmemory and dualchannel.