If you get tired of your music collection, there’s an FM radio with RDS in the LG Optimus 2X. It can play over the headphones or the loudspeaker, but the headphones need to be plugged-in either way.

The LG Optimus 2X did greatly in the first part of our audio quality test. When connected to an external amplifier the handset impresses with a really accurate audio output. All the readings in this case are great and if it wasn't for the loudness, which is only average, we would say that it's among the best on the market.

When headphones come into play however the stereo crosstalk takes a way too serious hit - it gets relegated from excellent to one of the worst we have seen. At least the rest of the readings as well as the volume levels are almost unaffected, which is somewhat of a consolation. Still we wouldn't rate the Optimus 2X anything higher than average on this occasion.

You should bear in mind, we have a pre-release hardware on our hands, so things might be improved with retail units. We've certainly seen that happen before.

We re-ran our audio quality test on the retail unit we recently got. Unfortunately, it's on the same level as before, so you should really take it as it is. 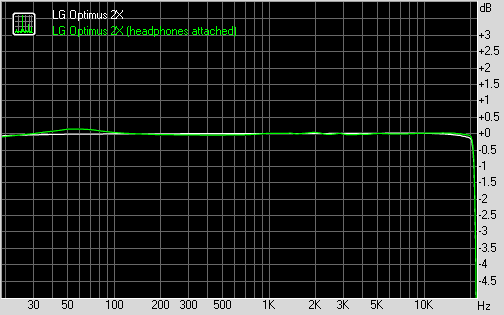 The video player has a fairly simple interface – it’s just a list of all the videos on the devices. There’s an alphabet scroll to help users locate videos faster but that’s about it. You can of course play videos from the Gallery if you prefer its folder-centric organization.

Two more buttons are available on the screen – one toggles cropping (i.e. fit video to screen, or crop it to fill the entire screen) and the other activates the Virtual surround.

The LG Optimus 2X handled just about every video file we threw at it – the usual 3GP and MP4 stuff along with WMV and AVIs using DivX and XviD. 1080p videos played well too – DivX and XviD videos that is, the MP4 FullHD videos we tried wouldn’t play (but 720p videos worked).

The video player wouldn’t play MKV files – a very common format for HD content, which is a dent in the Optimus 2X shining armor of FullHD support and HDMI connectivity.

Subtitles worked fine, however, and you have settings for font and size. You can toggle subtitles on and off, but there’s no option to manually load subtitles (so the subtitle filename has to match the video filename).

There are some issues that need to be addressed though – only English subtitles worked, any non-Latin characters would cause the subtitles to fail (even Spanish subtitles). Using UTF didn’t help.

Also, to change the HDMI output resolution settings, you’ll have to access the main Android settings.