The LG Optimus Black uses the standard Android gallery. The gallery automatically locates the images and videos no matter where they are stored. It also boasts cool 3D effects and transitions, which we find rather attractive.

You can use the gestures button to flip through photos and zoom-in on a photo.

Alternatively, you photos can be organized by date with the help of a button in the top right corner, which switches between grid and timeline view. In grid view, there’s a date slider, which can also be used to find photos taken on a certain date.

The pinch zooming is also available here thanks to the Optimus Black’s multi-touch support but you can also use double tap or even the +/- virtual buttons.

There are tons of options for a picture – you can crop or rotate it directly in the gallery. The Send feature offers quick sharing via Facebook, Twitter, Picasa, Email apps or Bluetooth.

Zooming and panning is fast and smooth and there’s absolutely no lag in doing it.

The music looks familiar but it has seen some polish. It can do the usual filtering by album and artist and you have alphabet search and regular search for finding songs quicker.

Flipping the phone on its side reveals a cool 3D wall of all the albums you have in your music collection. Tap on an album and you’ll see a list of all songs from it. There’s an alphabet scroll at the bottom of the screen to make finding albums faster.

The Now playing interface places a big album art image in the center with controls above and below it.

Swiping the album art left or right is the easiest way to skip a song or go back to the previous one.

A press and hold on the album art will bring up a menu to search – for the title, the artist or the album title. After that you can pick where to search – your music collection, YouTube or a general Internet search.

There are equalizer presets available including a Virtual surround option, which works even without headphones, but the effect doesn’t do much without them.

Also when you’re playing a song it gets displayed in the notification area. You can also pause and change tracks.

Audio output is mediocre at best

Surprisingly, the LG Optimus Black P970 failed to impress in our audio quality test. The handset did well below the norm even when connected to an active external amplifier - it has its extreme bass frequencies cut-off, the noise levels, stereo crosstalk and dynamic range are mediocre and the distortion levels are average at best.

If it comes as any consolation to you, things get only marginlly worse when you plug in a pair of headphones - the stereo crosstalk takes a hit and the distortion levels increase, but only very slightly. This doesn't suffice for a good overall mark. Plus the Optimus Black is one of the quiestes handsets we have seen, so you will understand why we aren't too excited about its performance here. 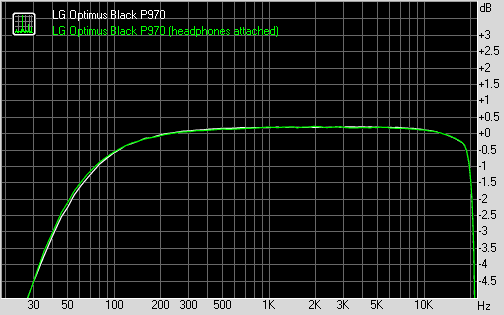 If you get tired of your music collection, there’s an FM radio with RDS in the LG Optimus Black. It can play over the headphones or the loudspeaker, but the headphones need to be plugged-in either way (they act as an antenna).

The video player has a fairly simple interface – it’s just a list of all the videos on the devices. There’s an alphabet scroll to help users locate videos faster but that’s about it. You can of course play videos from the Gallery if you prefer its folder-centric organization.

Two more buttons are available on the screen – one toggles cropping (i.e. fit video to screen, or crop it to fill the entire screen) and the other activates the Virtual surround.

The LG Optimus Black handled just about every video file we threw at it – the usual 3GP and MP4 stuff along with WMV and AVIs using DivX and XviD. 1080p videos are a no go, due to the single-core processor. Still 720p videos work just fine.

Subtitles worked fine too, with settings for font and size. You can toggle subtitles on and off, but there’s no option to manually point to a subtitles file, so the subtitle filename has to match the video filename.

There are some issues that need to be addressed though – only English subtitles worked, any non-Latin characters would cause the subtitles to fail (even Spanish subtitles). Using UTF didn’t help.