We just stumbled upon an LG Optimus Black running the Windows Phone 7 OS and we are not quite sure what to make of it. It could either be a photo of an upcoming LG WP7 device, which uses the same chassis as the sleek Android, or maybe someone has managed to port the Microsoft OS on the existing Optimus Black.

However, porting WP7 to the Optimus Black seems quite impossible as that one has a TI OMAP chipset, while WP7 only supports the Qualcomm Snapdragon chipsets. It would take an enormous amount of effort to bypass that limitation (if at all possible) and, frankly, we don't think anyone will bother. 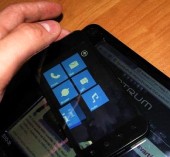 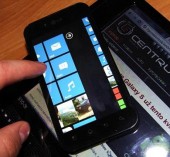 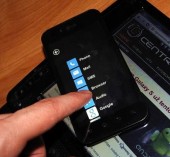 That's why we believe that this here is one of the upcoming WP7 devices that should be announced this Fall. Considering how much we loved the Optimus Black exterior, we'd be pretty happy to see another version of it hit the market.

Of course, there's always the possibility that this is merely a WP7-skinned launcher, installed on the regular LG Optimus Black and its normal Android platform. There are plenty of launchers and skins on the Android Market, but we don't think we have seen one as elaborate as this. Plus, the source says it's genuine so we are really hoping they got that one right.

this is a launcher called WP7 android seven.apk

I don't think you have ever used WP7, don't know about the other. You can't just download and use WP7, it will have very extremely limited capabilities.