LG has shown a serious commitment to pushing the limits of Android hardware. The first dual-core droid was manufactured by the Koreans and, while they showed up late to the quad-core party, they're back with a bang with the Optimus G - the first phone to employ the Snapdragon S4 Pro chipset. 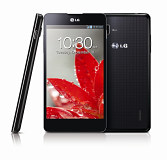 If you're not familiar with Qualcomm's numbering scheme, S4 chipsets fall into three categories - Play (for low-end phones), Plus (the one with two Krait cores we've seen a good deal of) and Pro.

What S4 Pro chipsets do is combine four Krait cores with next-gen Adreno 320 graphics (Plus employs Adreno 225). LG is the first to bring an S4 Pro-powered smartphone to the market (even though Xiaomi had one announced a while ago).

The LG Optimus G E973 puts another first on its resume - it's LG's first phone with a 13MP camera.

The screen boasts some impressive credentials as well. The 4.7" True HD IPS Plus screen of WXGA resolution (768 x 1280) has Zerogap touch technology (in-cell touch, laminated layers to reduce glare). The screen bezel is kept to a minimum too.

Here are the rest of the LG Optimus G E973 highlightsd.

LG Optimus G at a glance:

And that's not all either. The sides of the Optimus G are laser-cut for excellent build quality, there's real glass at the back with a polarized pattern that shifts as you move the phone and the battery should have a longer lifespan with 800 recharge cycles.

Optimus G steps in front of our camera

We have a hands-on under our belts, but it's time to take a closer look at the Optimus G. We'll start off with what's in the box and then see what kind of effort went into the fit and finish.

I guess LG have some great smartphones devices - Optimus G included. But they are somehow reticent in increasing the pitch of their advertisement and publicity campaigns. Anyway, I have found a Facebook campaign on LG Facebook page that gives a...

Phone is good. Really fast. But the music player with the earphone is really bad. Bass sounds like the ear piece is broken. I had mine replaced but the replacement sound exactly the same. I should have accepted the salesman offer to replace m...