The LG Optimus G uses its own custom gallery which is like the stock ICS one but with some added tweaks here and there. It automatically locates images and videos no matter where they are stored on the phone. By default, images are sorted by albums, but you can sort by location or time as well.

There are plenty of editing options available, ranging from photo effects to cropping and rotation to red eye removal.

The Gallery app displays images in full resolution. Zooming and panning involves no lag whatsoever on the Optimus G.

The music player on the LG Optimus G has seen some changes over what we saw on the Optimus 4X HD. The interface is completely revamped and is now easier to use with various tweaks that ease navigation.

Music controls in the notification area

The video player on the Optimus G has a fairly simple interface, giving you just a grid of all the videos on the device. There's an alphabet scroll to help users locate videos faster but that's about it. You can, of course, play videos from the Gallery if you prefer its folder-centric organization. For each video you've started, the thumbnail gets a tiny clock icon, which shows how far into the video you've gone in.

The interface during playback is nothing overcomplicated either, yet it's quite powerful - in fact the video player was the focal point of most of the custom features developed for the LG Optimus G.

The live preview while viewing a video is gone, sadly. It was a YouTube-esque pop up preview of the video above the scrubber.

To get the basics out of the way, the available controls during playback include a scrubber for jumping to various parts of the video along with the standard play/pause and skip buttons. There's a Dolby Mobile toggle as well. LG have implemented MX Player-like controls too - a swipe left or right will move the video forward or backwards, while a swipe up or down will influence brightness.

One of the new additions is a Video Speed control (you can set values from 0.5x up to 2x). There's a lock button too, which hides all controls for pure full-screen viewing. Another new feature in the video player is Live Zooming. You can zoom in (with a pinch) during actual playback and we mean some serious zoom length, not just a quick resize or fit to screen.

The LG Optimus G handled everything we threw at it - DivX, XviD, MKV and MP4/MOV up to, and including, 1080p resolution. The AC3 audio codec (among lots of others) is supported, so you don't have to worry about the sound either. There are no limitations for the bitrate, file size, etc.

Subtitles (both Latin and non-Latin) are supported with settings for font, color, font and size. You can toggle subtitles on and off, but there's no option to manually point to a subtitle file, so the subtitle filename has to match the video filename.

LG took Samsung's pop-up play feature a whole lot further with Q Slide. A dedicated virtual button takes the video from the player to the UI - anywhere in the UI. In portrait mode the video is a thumbnail, which is dead-locked at the top of the screen, while in landscape it takes up the whole display. The unique feature here is the slider, which directly controls the opacity of the video layer.

This way the underlying user interface can be more or less visible.

Q Slide a video to use the phone while watching

The LG Optimus 4X HD audio output was pretty disappointing, but the company has obviously learned its lesson and here comes the LG Optimus G with some of the cleanest output we have seen.

The below average volume levels aside, the Optimus G results came out excellent in the first part of our test. When connected to an active external amplifier, the smartphone produces excellently clean output with no weak points whatsoever.

Even more impressively, stereo crosstalk is the only area of its performance to suffer noticeably when we plugged in a pair of headphones. On that occasion the LG Optimus G produced one of the cleanest outputs we have seen. The volume levels don’t drop like on most of the Optimus G rivals, either, so they can qualify as average on this occasion. 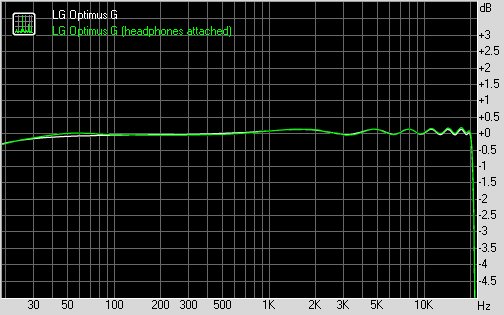