LG Optimus G to hit the US market in Q4, price yet to be confirmed

LG officially confirmed the Optimus G for the US market. The quad-core beast was announced for few weeks ago, and had its official launch event for Korea yesterday.

Today LG held another event dedicated to its new flagship, this time in New York. The Koreans used the occasion to confirm that the LG Optimus G will be coming to the US shores in Q4 of this year. 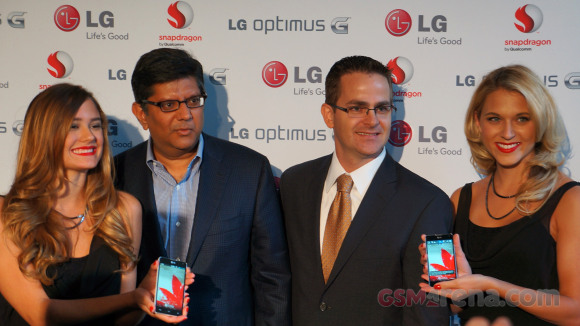 Sadly, there were no specifics given on the pricing or the carrier availability of the device. Knowing how hard LG tries to push the device, however, we expect it to hit all major carriers eventually

Network-support aside, the US Optimus G is identical to the international version – it packs a 4.7-inch HD IPS touchscreen and is the first phone to be powered by a quad-core 1.5GHz Krait processor and an Adreno 320 GPU.

The Optimus G also features 2GB RAM, an 8 or 13 megapixel camera with 1080p video recording, and the usual connectivity options plus LTE and NFC.

The phone runs on Android 4.0 ICS, but the Jelly Bean update will follow shortly after release.

We already got our face-to-face meeting with the Optimus G. You are welcome to check it out right here.

...can us samsung fan boys and lg fan boys htc or whatever fans go back to apple vs android? i liked those arguments better:/ lol

Lg I come to you one last time. my friends and family have always supported your products. phones tv fridge computer monitors etc... the lg optimus 2x was my first android phone. and i trully love it. I spent lots of money on it and i cannot afford...