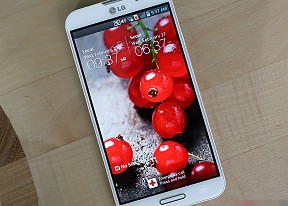 The custom launcher runs deep into Android and adds tones of customizations like themes, changeable icons and a slew of LG home-brew apps.

The Optimus G Pro is LG's first handset we meet running on Jelly Bean, but there are only few novelties compared to the ICS. Google Now is on board, the Project Butter gave a boost on the UI smoothness and frame rate, but that's mostly it. The rest is identical to the Optimus G Pro user experience.

LG's cool lockscreen is on board - by default swiping a finger at any spot of the lockscreen creates a magnifying glass effect, showing you what's underneath as if you're looking through a rain drop. You can also place up to four shortcuts that will unlock the phone straight into an app.

You can change the lockscreen clock style or replace it all together with a different style. The four app shortcuts are customizable, too.

The bottom of the homescreen fits up to 7 shortcuts (including the shortcut to the App Drawer) and that's two more than what TouchWiz offers on the Samsung Galaxy S III. You don't have to use all available slots though - you can discard all but the App Drawer shortcut if you want.

As usual, the shortcuts are visible on any of the homescreen panes. With the exception of the app drawer shortcut, you can rearrange, delete or replace any of these with shortcuts of your choosing, even folders. In fact most aspects of the phone's behavior can be customized, you can go to as small detail as the capacitive key backlight and the transition effect between homescreen panes.

The LG home-backed tweaks and enhancements are by no means limited to the visuals. The Q Slide option makes it possible for you to watch a video while using other apps, while the system-wide QuickMemo integration allows you to take a screenshot anywhere in the phone and take notes over it.

You can resize widgets or you can even shrink a widget down to the corresponding app's icon. Also if you move a widget over an occupied slot on the homescreen, the icons underneath immediately move out of the way, which is really neat and comes as part of Jelly Bean.

Placing widgets and changing the wallpaper

If a certain icon isn't to your liking you can always change it to whatever you prefer. There's a wide choice of different icons and you can even choose to make one of your own.

The contextual menu is accessed the straightforward way - just hit the menu button. It gives you a quick access to a bunch of different settings menus as well as choosing a different theme.

LG has also enabled a ton of other customization to the the homescreen looks and behavior. There's a dedicated setting for looped homescreen scrolling and the so-called screen effect changes the transition effect between homescreen panes.

The notification area was also been tweaked by LG to allow you to rearrange the toggle buttons shown there. You are also free to add and remove toggles from the edit menu. You can add an insane amount of shortcuts here, but don't worry that they won't fit on the screen - the row becomes side-scrollable so you can still access them all.

As usual, if you've got a music track playing in the background, quick controls will show up here. You can also drag notifications to the left or right to dismiss them.

By default you get seven homescreens to fill up with widgets and shortcuts, but you are free to delete any that you don't need to speed up navigation. You can also set the default homescreen to any of the panes.

The task manager on hasn't changed a whole lot since ICS. It shows you all of the currently running apps, and lets you stop them by swiping them to the left or right. It is accessed by holding down on the hardware home button. There, you'll also find a shortcut to Google Now, a Jelly Bean exclusive.

Additionally, there are number of icons at the bottom, which allow you to quickly open up a particular app or even stop all apps simultaneously.

Finally, there's a shortcut to the task manager.

LG's task manager lists the currently running apps, but also lets you uninstall apps and gives you info on your storage. It comes with its own dedicated widget, which shows a graph of the available RAM and conveniently offers a button to clear up memory.

The app drawer lists all your available apps and widgets, with a dedicated tab for user downloads. There is a button in the top right corner, which triggers edit mode and lets you to easily reorder and uninstall applications.

You can opt to make the icons in the app drawer smaller too. If you select an app whilst in edit mode, a pop up will let you see information like RAM usage, etc.

LG borrowed a trick from Samsung's TouchWiz and implemented its own version of Samsung's Smart Stay - called Wise screen. It uses the front-facing camera to detect if you're looking at the screen. This means you can browse the phone for hours on end without it auto-locking itself. We can confirm that the feature works very well.