The LG Optimus G Pro came in a well-stuffed box. The charger is slightly bulkier than usual (still compact enough to carry around) but an output of 1.8A makes all the right difference compared to the 1A of smaller chargers.

The box we got the G Pro in also packed a spare battery unit and the supplied stand has a slot at the back to accommodate it. You cannot charge both batteries simultaneously with the stand though - you will have to use another charger for the phone.

The rest is pretty standard: a microUSB cable for computer connectivity and charging (the stand has a microUSB port too) and a QuadBeat headset. The headset is an in-ear design with flat cabling and a remote. The remote has an answer button, along with volume controls. There are two extra ear tip sets included.

The LG Optimus G Pro measures 150.2 x 76.1 x 9.4mm - nearly 2cm taller and a centimeter wider than the Optimus G, though the bigger screen accounts for most of that extra size. The G Pro is narrower and slightly shorter than a Samsung Galaxy Note II, however, which means LG has made better use of the available space than Samsung.

The pro weighs 160g, which is only 15g more than the non-Pro version and 23g lighter than the Note II. Overall, LG has done well to keep size and weight in check despite the large screen and massive battery (which weighs 56g itself).

The LG Optimus G Pro takes some design cues from the Optimus G but does well to set itself apart. It's smoother with rounder corners, beveled screen glass, more curvature around the back and even the camera which sits on a smoothly beveled bump rather than a small square.

Another important difference is that the front of the white G Pro is actually white, unlike the regular G whose front was black regardless of the body paintjob.

The build of the Optimus G Pro is dominated by glass - both the front and the back - though LG hasn't disclosed the exact details of the finish. Still the phablet manages a premium, quality feel.

The display is obviously a major feature and we'll talk about its image quality in the next chapter. The glass above the display is curved, which is good, though the plastic edge that runs around the sides of the phablet is raised and spoils the feel a bit.

The screen bezel looks razor thin, though LG does cheat a bit here - if you look at the G Pro, at first you'd think that the white border is the bezel of the screen, but the actual bezel also includes a black border that's easier to see when the screen is on. That said, the bezel isn't thick by any means.

Anyway, above the display we find the usual setup - a centrally located earpiece, a proximity sensor and the secondary 2.1MP camera right next to it. The LG Optimus G Pro supports dual-video recording, which means you are able to capture video with both cameras simultaneously.

The earpiece, the proximity sensor and the secondary camera

Below the display, a hardware Home button is surrounded by capacitive Back and Menu keys. The home key is rather thin and almost flush against the surface, it's not the most comfortable button to use.

There is a status LED below the Home key. It is highly customizable and lights up in different colors depending on the notification - incoming or missed calls, alarms, calendar reminders, apps, etc.

The hardware Home key with the hidden status LED beneath

The left side the Optimus G Pro features a customizable Q-Slide key and the single-piece volume rocker below it. Those keys used to be combined in the Optimus G, but we like this solution better as it rules out accidental presses of the volume controls. The volume rocker is noticeably more raised than the Q-Slide key, which helps touch orientation.

On the right side is the lonely Power/Lock key.

The top of the G Pro has an IR emitter for the remote control functionality and right next to it is the 3.5mm audio jack. The Slimport-enabled microUSB port is at the bottom. There are two mics on the phablet - one at the bottom, which serves as a mouthpiece, and one at the top, for noise-cancellation during calls and stereo audio capture during video recording.

The battery cover is made entirely of glossy plastics, but it is nicely textured and reminds us of the Nexus 4 back. The pattern uses squares instead of dots, but they still "move" as you tilt the phone. The metallic LG and LTE logos are engraved on the plastic, so you can actually touch them, unlike the logos on the Optimus G, which were hidden under the glass.

Anyway, the back of the LG Optimus G Pro also features the 13MP camera lens, centrally placed at the top. The LED flash and loudspeaker grille are on both sides of the camera.

A peek under the battery cover reveals the microSIM card slot (it's obstructed by the battery so you can't hot swap it), the hot-swappable microSD card slot and the 3,140mAh battery itself.

A peek under the battery cover 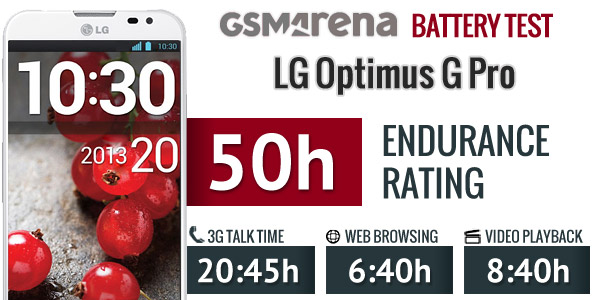 LG is selling Quick Covers for the G Pro - a flip cover that automatically switches the screen on and off as you open and close it. Those covers have a hole cut out to let you see the LED notifications around the Home button.

The Optimus G Pro is a solidly built phablet with a practical design. It has good looks, though it's not terribly original (it looks a bit like the Note II to be honest). Holding the phablet in the hand and pocketing isn't a problem, though unless you have big hands you'll have issues reaching the four corners of the screen with your thumb. At least until you find the right hand hold the Optimus G Pro (you have to hold it higher than you would a smaller handset, it takes some getting used to).