LG Optimus G is still one of the most powerful smartphones on the market, but the rumors of its successor are already at full swing. The image and the specifications of the international version of the LG Optimus G Pro have been leaked and the smartphone is rumored to be launched at the upcoming Mobile World Congress. 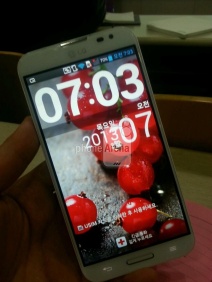 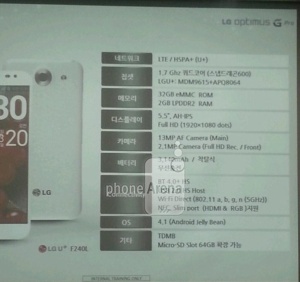 The upgraded version of Optimus G is rumored to come out with a 5.5" full HD IPS-LCD display and will be powered by a 1.7 GHz quad-core Snapdragon processor with 2 GB RAM, 13-megapixel rear camera, 2-megapixel front camera, Android 4.1 Jelly Bean and LTE radio built in.

LG Optimus G Pro will also feature 32 GB internal memory and will support microSD cards up to 64 GB. The device will be powered by a huge 3,140mAh battery, which sounds quite impressive.

LG will be aiming to attract a larger consumer base with its powerful Optimus G Pro in a market, which will be occupied by the likes of Samsung Galaxy S IV, HTC M7 and Sony Xperia Z.

Optimus G is alredy available in Middle East I bought mine from KSA and it cost 2100 Saudi Riyals!

If you want to buy an lg phones, better you wait until they bring android key limpie out of the box.