The LG Optimus G Pro, a successor of the popular Optimus G smartphone might be launched in April, according to a listing from NTT DoCoMo. 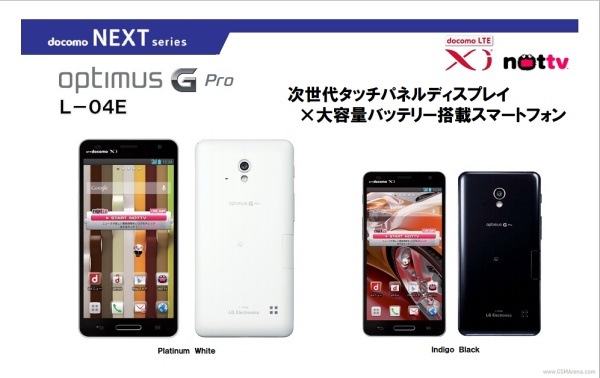 The listing also reveals the dimension of the smartphone to be 10x70x139mm and the phablet weighs about 160g. LG Optimus G Pro will be featuring a 1080p LCD Full HD TFT display and sport a 1.7 GHz quad-core processor. The smartphone will come out with 13.1 megapixel CMOS camera and expandable storage via a microSD card slot.

The Optimus G Pro will run on Android 4.1 Jelly Bean and will be powered by a 3,000mAh battery. The latest listing also confirms that the device will be available in White and Indigo Black color variants.

The international version of the LG Optimus G Pro smartphone is likely to be announced at the upcoming Mobile World Congress. The company's press event is scheduled for February 25. Watch this space as we will be covering it live.

Thanks Patrick, for sending this in!

You are wrong. I can watch 2 full movie (2 hours each) on the LG G. Battery is amazing to say the less. The power consumption on the screen is small but delivers stunning clarity.

I got the the Galaxy Note with 16Gb and 32Gb external but let me tell you that video doesn't bother me because I use a cable which connect my phone to a USB Stick of 32Gb for movies and video clip. But why all that? Because I love HD Games which...