Hot on the heels of the budget L-Series trio announcement, LG took the wraps off the 5.5" 1080p display toting Optimus G Pro. The Android beast, while carrying the same name as the already official Japan-only device, is an altogether different character. 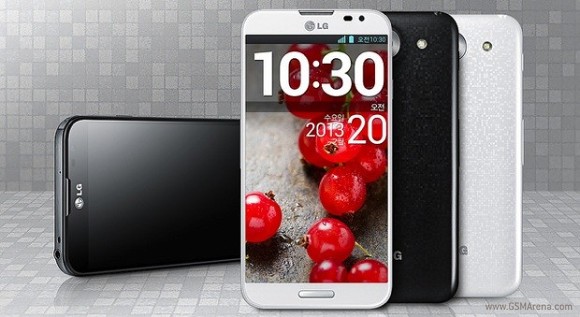 Curiously, LG released almost no specs for the smartphone, save for the presence of the impressive 5.5" 1080p display and a quad-core CPU of unknown make. Previous leak however, points at a Qualcomm Snapdragon S4 Pro unit.

The press shots of the newcomer reveal a back with great-looking sqaure patterns. LG says that the curved glass covering the device will create a 2.5D effect when looking at them.

LG points at a late February release for the Optimus G Pro, so we will likely get to have a look at the device during MWC in Barcelona.

Pretty good in terms of the phone specifications. But the one minus point for LG would be that the looks of their phones have never been anywhere near Samsung. Most of their phones look like a brick and that the worst part. But I have one about their...

L9 user here e this phone my L9 needs a new partner. L9 is a beautiful black elegant phone. I have no problem everythings are fine. LG your still my #1favorite phone maker. Keep up the good work.

yes it has micro sd card slot to expand memory up to 64 gb.